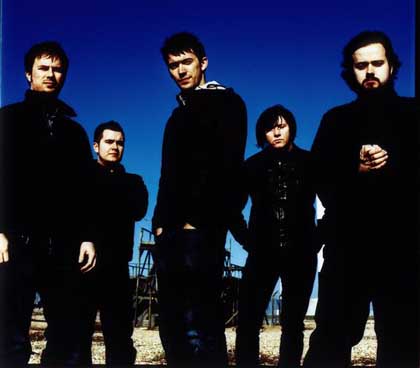 Funeral For A Friend have scooped the Artist Of The Year prize for their digital campaign of the Tales Donâ€™t Tell Themselves album at a recent music awards ceremony.
Earlier this week the band beat off stiff competition from Muse, Razorlight, Bloc Party and Natasha Bedingfield to lift the BT Digital Music Award.
The band were among Hundreds of musicians, celebrities and music industry professionals who flocked to Camden’s legendary Roundhouse, where Sara Cox announced the winners at the lavish event.
This category was one of a handful judged by a panel of industry experts, all others were voted for by the public.
Music fans that weren’t lucky enough to bag a ticket to the exclusive event can catch all of the action in an hour-long awards show presented by Alex Zane on Channel 4 on Friday October 5th at 00.40.
myspace.com/funeralforafriend