Welsh rockers FUNERAL FOR A FRIEND release their ‘Waterfront Dance Club / Beneath The Burning Tree’ double A-side single THIS WEEK via their own brand-new label, Join Us Records, as a limited edition coloured vinyl-only release.‘Waterfront Dance Club’ is also available as a FREE download NOW – get it from waterfrontdanceclub.com

The band have recently announced an extensive UK tour that will take place throughout October, November and December 2008 in support of their fourth album, the first on their own label, ‘Memory And Humanity’. 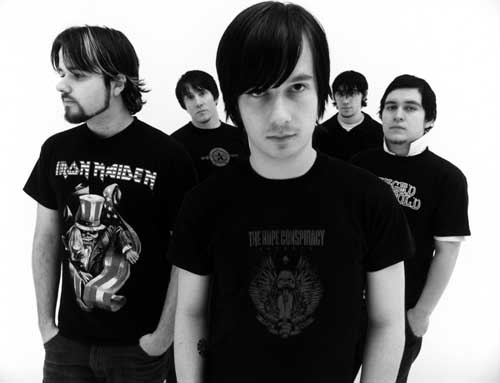 It is due for release on October 13 – exactly five years to the day that their debut record ‘Casually Dressed and Deep In Conversation’ hit the shelves!

Support on the tour will come from Canadian metallers Cancer Bats, Irish upstarts In Case Of Fire and Welsh combo Attack Attack.

“In my opinion this is the most exciting and eclectic touring lineup we’ve ever put together,” explains Ryan Richards (Drums). “Every band brings something extra to the evening and will definitely bring the best out of us and keep us on our toes. We’re going to have to limit ourselves to how many brand new songs we’re going to play I think, otherwise we might get carried away and play the whole thing. It’s just an album full of songs that are begging to be unleashed upon our lovely fans.”