Released by label of the moment for incoming pop from the left field (Because Music, home of Metronomy, Justice, Charlotte Gainsbourg, Kap Bambino and Uffie), â€˜About Loveâ€™ is a radio-friendly, art-punk anthem about breaking up, executed with Kathleen Hanna sounding vocals and Bardot-era Gallic chicness. 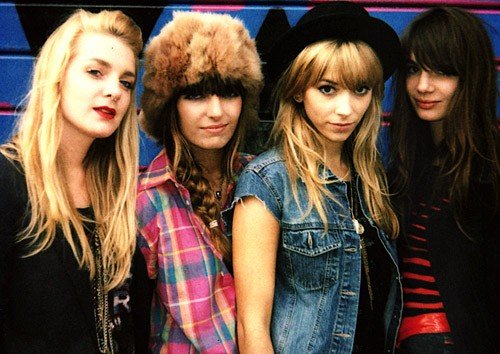 www.myspace.com/plastiscine
WHO ARE YOUR INFLUENCES IN THE MUSIC INDUSTRY ?
Marine: we love The Ramones, Blondie, The Buzzcocks, The B-52’s, The Stooges and recently, The White Stripes, The Strokes and The Libertines.

WHAT HAS BEEN THE HARDEST PART OF BEING IN THE BAND FOR YOU ?
marine: its hard sometimes being away from your family and friends when its been a long time on the road.. and you get tired you eat junk food and drink vodka red bull to wake up! but its part of rock’n’roll rules 😉

TELL US A BIT ABOUT YOUR EARLY DAYS AND HOW THEY DIFFER FROM NOW ?
marine: it was really punk when we started the band as we didn’t know how to play well our instruments, for us, the most important was being on stage to give our energy to the people who were quite amazed to see 4 young girls screaming and rocking without taking care of being perfect! especially in France, we dont have loads of riot girls bands.

WHAT WAS THE LAST GIG YOU PLAYED, WHAT DID YOU THINK OF IT ?
Ana: the last gig we played was in Angers, not really far from Paris and it was crazy! when we had diner before going on stage, everyone was telling us that the audience of this city was a bit boring but from the very first song to the very last, 700 people were singing, dancing and singing with us!

WHATâ€™S THE MOST SUCCESSFUL THING YOU GUYS HAVE DONE TO DATE ?
Ana: my band is the most successful thing i’ve done from far! we’ve been through a lot and we stayed really closed to each other, helping one another in bad times and enjoying together all the good times we have!

WHO HAS HELPED YOU THE MOST GET TO WHERE YOU ARE TODAY ?
Ana: a lot of people helped us in 5 years, but our manager Maxime Schmitt is THE ONE who believed in us from the very first day and he’s done everything for us and it’s our streight that the 5 of us are so close!

WHATâ€™S COMING NEXT FOR THE BAND
Ana: we’re on tour right now in France until june, then we’re gonna do festivals in France, we’re going to Spain and Italy too and we might go bk to NYC in September.

IS IT HARD BEING A NEW BAND IN TODAYâ€™S INDUSTRY ?
Ana: i guess it’s not as simple as before with all the downloading issues but it’s still pretty awesome being in a rock’n’roll band!!

HOW IMPORTANT IS THE INTERNET AND SOCIAL NETWORK SITES TO THE SUCCESS OF YOUR BAND ?
Ana: it’s important for cause we can keep in touch with our fans, they feel closer to us via our blog, facebook and twitter that we’re updating every day!

QUICK-FIRE QUESTIONS:
WHOâ€™S THE MESSIEST IN THE BAND?
Ana: louise!! she’s losing everything everytime!! once, in one week, she lost her phone, her passport and her ID!!

WHO IS HARDEST TO LIVE WITH ON TOUR?
Ana: louise because she’s messy haha!

WHO IS THE MOST ROCK â€˜Nâ€™ ROLL & WHY ?
Ana: Marine because she moves her hair a lot on stage

WHO IS THE LOUDEST ?
Ana: we all are cause we’re getting deaf!

WHO IS THE MOST ANNOYING ?
Ana: no one! everyone is funny, it’s a rule!

WHATâ€™S T E MOST EMBARRASSING THING SOMEONE IN THE BAND HAS DONE ?
Ana: Marine when she burps on stage on her microphone, pretty funny though

WHO WOULD YOU MOST LIKE TO COLLABORATE WITH IN THE INDUSTRY ?
Ana: there is so many! but Iggy pop will be awesome to collaborate with!
Â©FAME Inc