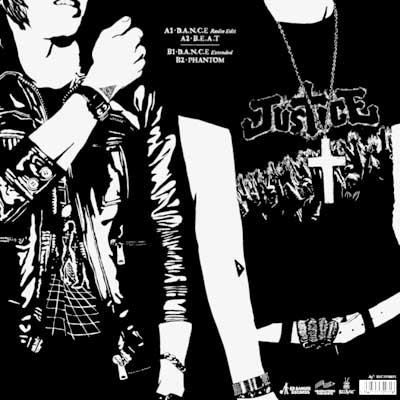 No one can say they didnâ€™t see these two brats coming! Justice, whoâ€™s name the world (well at least that part of the world that loves to dance) chants with emotion and whose first album is awaited with bated breath ever since the French duo revolutionised dancefloors with two radically different hits. First, the housey and uplifting â€œNever Be Aloneâ€ which plunged clubbers into full on hedonism. Then, two years later, the striking and screeching â€œWaters of Nazarethâ€ that brought darkness onto clubs worldwide with its glitchy rhythms and sombre mood.

Xavier de Rosnay and Gaspard AugÃ© met three years ago and were both raised in the suburbs of Paris. Xavier was studying graphic design and Gaspard designed flyers. Xavier had been playing bass and guitar in dated disco bands and Gaspard played drums in average rock bands. Xavier is a chatter box, Gaspard is quiet. A month after they met, with the help of a groovebox and a sampler, they came-up with two tracks. The first, a tribute to the Buggles, ended-up on an obscure compilation and was quickly forgotten. The second, which contained vocal samples from â€œNever Be Aloneâ€ by the British electro act Simian, ended-up being heard by Pedro Winter, a rather fortunate turn of events. Pedro is an important figure in the French Touch scene as both manager of Daft Punk and boss of the label Ed Banger Records through which he was trying to give a new lease of life to the concept of the French Touch that had become oh so drab by being over copied by producers the world over. At that time Pedro was looking for a B side for his labelâ€™s second release, a remix of DJ Mehdi by ChÃ¢teau Flight. Ed Banger Records signed Justice and the test pressings went out to the worldâ€™s top DJs. The response was so positive that the track went from a being a B side to the A side. â€œNever Be Aloneâ€ was licensed by Gigolo, DJ Hellâ€™s label, and thatâ€™s when the Brits got a hold of it. 50,000 copies were sold and the track ruled dancefloors for three years and announced Justiceâ€™s noisy entrance into the history of dance music. Boosted by their sudden popularity, they were booked to DJ across the planet and did remix after remix, applying their sense of Justice to Britney Spears, Franz Ferdinand, Soulwax, Scenario Rock, NERD and many moreâ€¦ with a surprising sense of appreciation towards the original melodies and the would be rules applied in dance music.

Retreating to their underground post-nuclear shelter/studio, exiting only on weekends to shatter clubbersâ€™ eardrums, Gaspard and Xavier have been working on their first album as if their lives depended on it. The result has exceeded all expectations, a wonderful twelve track album which opens with â€œGenesisâ€. A dark baroque beginning that introduces a mind fuck of an album that proves that Justiceâ€™s unique talent is to be found where least expected. Take for example â€œLet There Be Lightâ€ and its strident angry electro driven by a jabbing bassline, â€œD.A.N.C.Eâ€, a pure piece of vicious house sang innocently by a choir of children, â€œNewjackâ€ a funky parody of the opulent times of the French Touch. â€œPhantom Iâ€ that takes over where â€œWaters of Nazarethâ€ left off to drift towards â€œPhantom IIâ€ and its head-swirling disco violins. â€œValentineâ€, an erotic melancholic nursery rhyme, like a tribute to Vladimir Cosma and â€œThe Partyâ€ a pure electro funk track where the sexy Uffie plays more than ever the cheeky Lolita. â€œDVNOâ€, a lesson to anyone trying to fuse electro with rock. â€œStressâ€, a hectic race that would drive the Chemical Brothers insane with jealousy. Or the finale, â€œOne Minute to Midnightâ€, a parallel to the â€œGenesisâ€ opening, which closes the album beautifully.

A generational manifest, ideally positioned on the side of the dancefloor, Â«â€ Â», insolent with youth, is a testimony that the French electro scene is healthier than ever. Justice first.