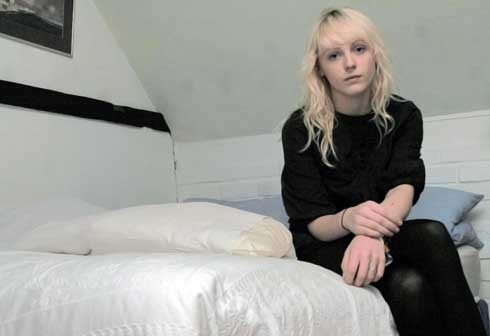 This is a chance to see one of the brightest up and coming female artists in the UK today before she hits the big-time and with an unprecedented free show to get people sitting up and taking notice, there’s no reason not to check her out before she’s famous!!

Laura Marling may still be young, but she certainly isn’t dumb. The 17 year old small town girl – Eversely just outside of Reading to be exact – doesn’t just sing about love, lust and romance but of the futility of religion, self-loathing and human psychology. The latest cutesy pop-puppet on the block, she ain’t.

An alternative folk star in the ascendant whose striking melodies and wise-beyond-her-years vocals could melt even the iciest of hearts, Laura Marling muddles the strength of Regina Spektor with the intelligence of Carole King and the acoustic lushness of Joni Mitchell.

She began playing the guitar at the age of three, first being taught the blues by her father in front of the family fire, and has been in thrall to the songs and lyrics of the likes of Neil Young, Bob Dylan, James Taylor and John Mayall ever since.

It’s not just the golden-oldies that Laura admires; she also harbours a rather deep love for alt.country’s favourite son, Ryan Adams. He’s brilliant, there’s nothing that even comes close, he can paint the most amazing pictures in your mind.

From the swinging strut of London Town the title track from Laura’s forthcoming Way Out West EP – each one of her songs is a mini-blast of prime poetry, gorgeous melody and sublime songwomanship.

She’s Changed – a more telling look into the mindset of a teenage girl than anything you could get via watching a whole series of Skins, and Failure, a marvelously mature mellow pop masterpiece which takes in everything from the futility of religion and fading rock and roll stars to aching self-doubt, contrast beautifully against the Whiskeytown-inspired piano jaunt of Man Who Sings About Romance which most people think is about Ryan Adams, but it’s mostly about men in bands who sing about women they hardly know.

Mexico’s vintage bossanova swing, could have been plucked straight out of classy lounge singers act sometime in late 1968, whilst New Romantic is a straight from the heart ballad of confused love and about fancying someone for all the wrong reasons,with deceptively simple but sweet harmonies, and Typical is one of the many highlights of her repertoire, a gloriously heroic tear-jerker in which Laura huskily laments I gave up morals when I took up booze.

Laura’s already hugely popular with indie’s big hitters; Jamie T personally invited her on tour with him last year after being hugely impressed by her gorgeous modern folk-pop when he caught her playing just her second ever gig.

More recently Rakes front man Alan Donohoe got in touch with her via her Myspace page and asked her to collaborate with the band on the fantastic Suspicious Eyes, a tale of racism and post 7/7 paranoia from their new album The New Messages

Her first real gig took place in February 2006 and was a slot supporting the legendary Howard Jones, Well, she whispers furtively, he’s my best friend’s dad.

The gig saw her playing four songs to a room of 300 devoted, not to mention heavily tattooed Howard Jones uber-fans, and winning each and every one of them over with her classy brand of delicate country-tinged tunes.

Laura has been writing her own songs for over five years, but admits that she only got good a year and a half ago when I stopped singing in an American accent.

She has since collaborated with fellow singer songwriter Thom Stone and is soon set to take on some of the members of defunct country band Captain Kick and the Cowboy Ramblers as her very own backing group prepare to be seduced by the fresh face of folk.