On 1 August 2011 The Travelling Band follow the release of their second album ‘Screaming Is Something’ with a new single. Called ‘Battlescars’ the download only single is backed by ‘Face To The Ground’ 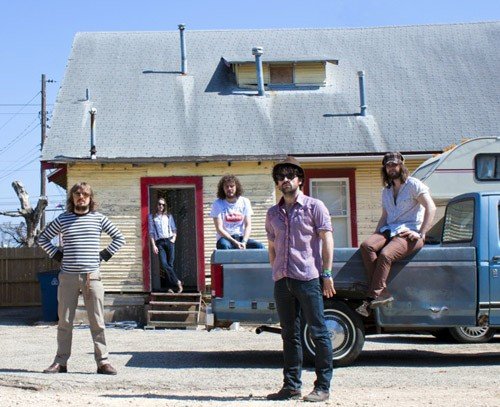 Get Your Free Download HERE:
“The Travelling Band take me back to my musical roots. Marvellous music to savour and enjoy” Michael Eavis, Glastonbury Festival

The Travelling Band’s shimmering blend of cosmic-country-pop, understated psychedelia, vocal harmonies and nu-folk has made them one of the most talked about artists to emerge from the Manchester music scene.

The Travelling Band on the recording of ‘Screaming Is Something’:
“The album was recorded in a few different locations but most of the recording was done in a converted church called Kinclochspelve on the Isle of Mull in Scotland. It was so desolate and tranquil on Mull and that gave that session a real focus. Producing the album ourselves was made more interesting and challenging by being so far away from anywhere and we encountered plenty of technical problems that we simply couldn’t do anything about as we were cut off from the rest of the world. There had been some scepticism from within the band at first whether we could pull off such an ambitious location recording but once we scoped it out we realised it was going to be a lot fun.”