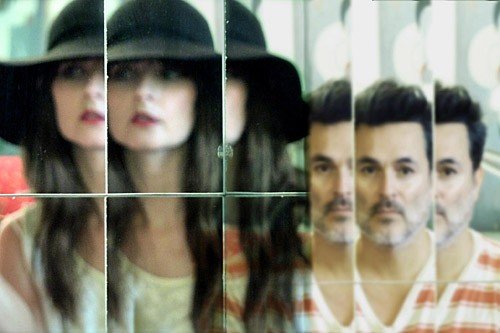 Polyamorous Affair – Fantasy – You Say Party remix by Agency X
‘Fantasy’ is the new single from LA’s The Polyamorous Affair, released October 24th. An ice-cold wave of minimal, modernist disco, ‘Fantasy’ is an invitation to the duo’s mysterious imagination. Balancing shimmering pop gloss against dark and sexual lyrical content, it’s an experience as jarring as it is tempting.

The single also includes a remix from Canada’s You Say Party (Paper Bag Records); the final remix by the band before disbanding earlier this year.

The Polyamorous Affair is a couple, Eddie Chacon and Sissy Sainte-Marie. Their music is an exploration of their relationship: at turns playful and pointed, with Sissy forbidding and alluringly distant and Eddie as her fiery counterpart.

It’s a concept that’s central to both their icily ambiguous stage show and their original take on the music video – including, for ‘Fantasy’, a spooky dinner for two…

‘Fantasy’ precedes a new album from The Polyamorous Affair, due to be released in 2012.

The single will be available to download from October 24th from iTunes and all good digital retailers or…its available now for free from their website in exchange for an email address:
thepolyamorousaffair.com