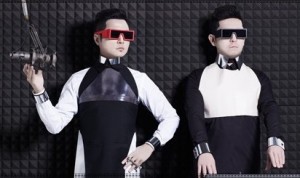 M-Flo is one of Japan’s most popular Hip-Hop groups, consisting of Taku and Verbal (who is also the Creative Director of Reebok Asia alongside Swizz Beatz).

Religion is made up of Kevin Stewart, Nick Dew, and Jared Poythress
and recently they just completed official remixes for Flo-Rida and Jay-Z.