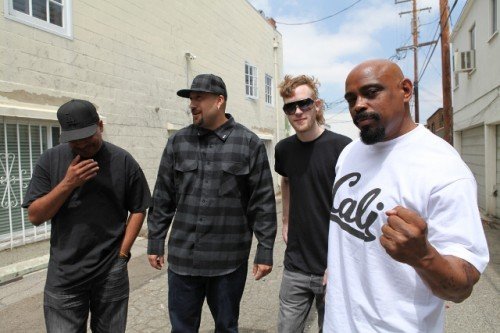 Hip-hop legends Cypress Hill and Dubstep DJ/Producer Rusko have finally announced the release of their collaborative effort Cypress x Rusko, out this April.

Featuring the striking, signature sound of Cypress Hill alongside Rusko’s unmistakable beats, the 5-track EP shows the full capabilities of two music pioneers combining forces to create yet another raw and unfiltered sound.

“I think dubstep is a natural progression of hip-hop,” says Sen Dog. “Especially the way that we formulated it with Rusko, there’s definitely some roughness to it.”

“We’ve always been the type of group to take chances on doing something radically different than what people expect from us. So this carries with the tradition of us going out of the box. If it’s not something that we embrace then we don’t dare mess with it and this is something we fell right into the pocket of,” adds B-Real.

The EP was recorded over a six-month period, with Rusko joining Cypress in the studio for part and sending tracks over email when his crazy touring schedule restricted him from being there in person. “It excited me so much when I received the acappellas because sometimes I’d been away for a week and I’d finally get a Wi-Fi connection,” says Rusko. “The excitement would keep me awake all night feverishly working on the track.”
Cypresshill.com
Ruskoonfire.com
Cypressxrusko.com