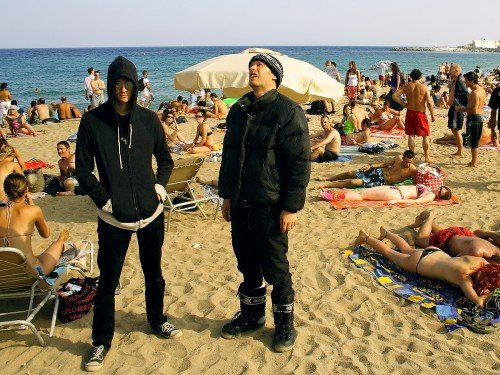 Wow! Civil Civic release their debut album ‘Rules’ on 7th Nov and they are giving away ‘Street Trap’ album track as a free download.
Civil Civic began life in 2009 as a spark in the fertile brain of guitarist Aaron Cupples. With the recruitment of bass-mangler Ben Green and the construction of ‘The Box’ – their drum-machine/light-show/robot-sidekick – it quickly manifested itself as a two-part human/one-part machine, three-piece instrumental band.

When the time came for Civil Civic to take to the stage, their ability to bring the party in a live club scenario was cemented, and touring Europe to promote their follow-up single – ‘Run Overdrive’ – they flat-out frightened some and converted many more.
Comparisons to Sonic Youth, Hüsker Dü and Big Black were bandied about in a growing atmosphere of intense interest.
Now Civil Civic has at last put together their debut album, entitled ‘Rules’, scheduled for release on November 7th 2011 (on Gross Domestic Product), and a thorough documentation of the sound that has won them their rabid and loyal following, with a couple of stylistic surprises to keep things up in the air.

The title ‘Rules’ reflects the self-imposed limitations and unbroken principles that have defined their sound so far.
civilcivic.com
civilcivic.blogspot.com