My Chemical Romance have been confirmed to play this year’s iTunes Festival at London’s prestigious Roundhouse venue on July 9th.

“We are stoked to be joining such an illustrious list of artists confirmed for the festival, and at the Roundhouse too. We’ve seen bands there but never played it ourselves. It should be a great night!” – My Chemical Romance 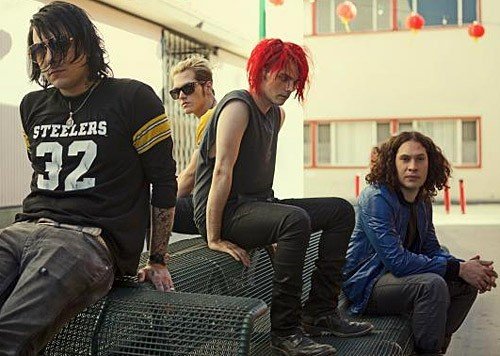 The band are one of the biggest names on a festival line-up that features 31 nights of back-to-back live music and also includes the likes of Linkin Park, Foo Fighters and The Arctic Monkeys.

All tickets for the iTunes Festival are free and can be applied for directly from www.itunesfestival.com/gb/lineup or ukundercurrent.com/mychemicalromance/itunes/ Tickets for the My Chemical Romance show will be available from Thursday June 16th.

The confirmation of the iTunes Festival show is the latest addition to My Chemical Romance’s summer festival dates. Having already played Radio 1’s Big Weekend, My Chemical Romance will headline the Reading and Leeds festivals on August 26th and 27th – tickets for which are on sale now. In addition, they will also play Oxegen and T in the Park on July 8th and 10th respectively.

My Chemical Romance’s current single ‘Bulletproof Heart’ is taken from their recent widely-acclaimed album ‘Danger Days: The True Lives of the Fabulous Killjoys.’ It started life as a straightforward song from the album’s early sessions called ‘Trans Am’ which was ripped apart then tied to a rocket, re-emerging from the sci-fi ether as the worldbeating ‘Bulletproof Heart.’

The high octane video for the track was filmed during the band’s incendiary performance for MTV World Stage that was held at Valencia’s Ciudad de las Artes y las Ciencias arena venue in March before an audience of 30,000 My Chemical Romance devotees.
www.mychemicalromance.com