HOLLYWOOD hottie Matthew McConaughey has reunited with actress Kate Hudson in the romantic comedy adventure Fool’s Gold.
The duo, who previously starred in the 2003 hit How To Lose A Guy In 10 Days, are back on form in the film about a divorced couple looking for a centuries old treasure.

Review by Andrea Clarke
McConaughey stars as Ben “Finn” Finnegan who is searching for The Queen’s Dowry, a treasure lost at sea near Key West in 1715. While searching for this treasure his marriage to Tess (Hudson) falls apart and the two divorce. When Finn finds an important clue to the treasure the pair reunite to find the missing cargo. 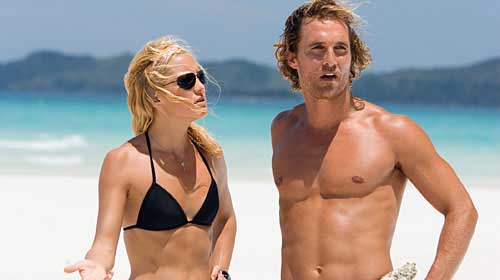 With the help of Tess’ millionaire boss Nigel Honeycutt, played by Donald Sutherland and his spoilt daughter Gemma (Alexis Dziena), the treasure hunters race to find the booty before local rapper/gangster Bigg Bunny (Kevin Hart) and Moe Fitch, played by British actor Ray Winstone.
Between deep sea diving, dodging bullets and crashing planes, Tess and Finn realise they still love each other.
It won’t win any Oscars but nonetheless the stunning locations and sizzling chemistry between McConaughey and Hudson make Fool’s Gold a great watch.
And a semi-naked Matthew McConaughey doesn’t hurt either.
moviehouse.co.uk
foolsgoldmovie.warnerbros.com