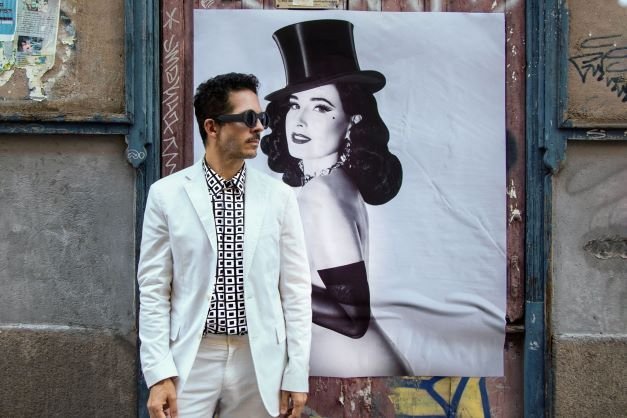 So much music coming out at the moment it’s hard to keep up! but wanted to make some space for this new project from one of half of the recently disbanded electro duo – Monarchy.  We’ve enjoyed Monarchy’s music over the years so was curious to see what they’d both do next. Daddy Squad is the new project from Andrew Armstrong and this new single, My Magic Number features burlesque superstar Dita Von Teese (who also guested on one our favourite Monarchy tracks – Disintergration)

My Magic Number is italo disco, camp electro-pop – not a million miles away from Monarchy, but definitely a different direction. It’s bold, funky, and fun, and perfect for the sunshine and showcasing Dita’s voice and personality perfectly.

Andrew says of the track: “It started as an instrumental, but straight away I could hear Dita’s voice on it, doing spoken word. I imagined it a mix of Grace Jones and Miss Kitten. The words and imagery just fell out. It’s surrealistic and colourful. Dita’s voice has the perfect purr for that. We organized a session in LA for her to record the vocals, while I sat in remotely on the session. It came together amazingly easily.”

It sounds like Daddy Squad is going to be a collaborative affair, with some impressive future collaborations on the horizon including Jake Shears from Scissor Sisters, Corrine from France and Tom Aspaull.

We welcome Daddy Squad to the world.

Listen to My Magic Number: daddysquad.lnk.to/mymagicnumber