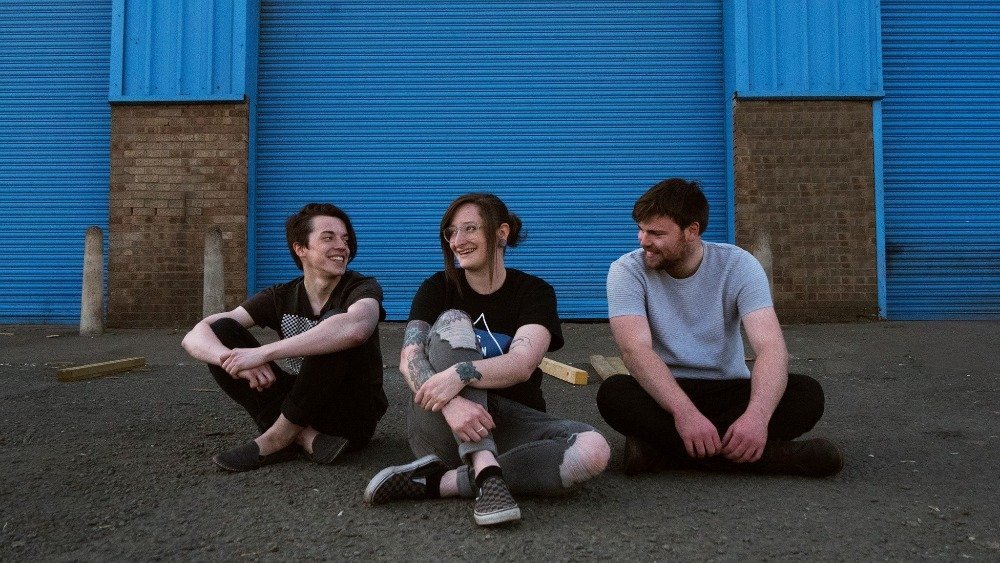 Hi The Violet Kind! please introduce yourselves to our readers? How did you guys meet?

Hey! We are Kyle Hamilton on drums, Liam Duffy on bass and Katya Mansell on vocals and guitar! Katya and Liam met at a friend’s paint balling party (there’s photographic evidence of this even though we don’t remember meeting each other!) and a few weeks later we found ourselves in a practice room getting ready for a gig! Kyle joined us about a year later and the first show we played as this line up was at the 02 ABC in Glasgow!

What’s your new single ‘Speakeasy’ all about?

Speakeasy is about giving a voice back to those who have experienced sexual violence. It’s about calling out perpetrators for the wrong that they’ve done and saying, “look – you can’t hide anymore.” For too long, women have been silenced from speaking out for fear of not being believed and so it felt important to create a platform where women could speak easily. In the song, the actions of a perpetrator are likened to the idea of a speakeasy – bars which existed during the period of prohibition in 20th century America. It’s not necessarily obvious what is going on behind closed doors. However, the actions are damaging and it is illegal for a reason. The theme of alcohol here also links to the idea that under the influence, one might not have the ability to say no. Speakeasy is saying no for people who weren’t able to.

Your new EP ‘OXTR’ is a concept EP – tell us about that:

Yes – OXTR is a concept EP! I took a lot of influence from film music; in particular the music of John Williams! Often, when there’s a villain present in a movie, a descending motif is played. When a hero is present, an ascending motif is played! With this in mind, I created the long descending riff for Speakeasy to represent the perpetrator, and then took a section of this riff to create the second song on the EP, Good Behaviour, which is directed at those who blame the victim. Though not as vile as the crime of a perpetrator, this attitude still has a serious affect on survivors. The second half of the EP is where the hero comes in. Good Behaviour was reharmonized and a new, ascending motif was created to represent those who believe and support survivors. This motif was then changed rhythmically to form the basis for the final song, Science, a song which celebrates self-care. By learning about the way the brain reacts to trauma, survivors can hopefully find some alleviation of pain and begin to heal. The same rhythm is played in every song; sometimes performed by the bass and drums, some on the guitar and some in vocal melodies. There are also lyrical ideas which are repeated or reformed throughout the whole piece!

Katya would really love to work with Ben Gibbard of Death Cab for Cutie (Hint hint… I hope this message gets to you!). I just find his songwriting so brilliant; it’s innovative and captivating. It’s melodically pretty and rhythmically clever!

Liam would love to work with Biffy Clyro! Loved listening to them growing up. A very different style to ourselves, it would certainly mix it up but I think it would all come together quite nicely!

What’s the music scene like up in Scotland at the moment?

The music scene is really exciting in Scotland at the moment! I’m lucky enough to work in a music venue and have the chance to see lots of awesome bands come through our doors. It’s also really great to see a lot of our friends in bands doing really well – I feel really proud to be part of something so special and to see so many people I love reaching their goals.

2018 is a really exciting year for us! We’ve been filming music videos and recording live sessions, and we’re in the recording studio making more music for you all! There are also plans to write more and play more! We will have more information on tour dates shortly, so keep in touch on social media to be the first to hear of our upcoming shows!