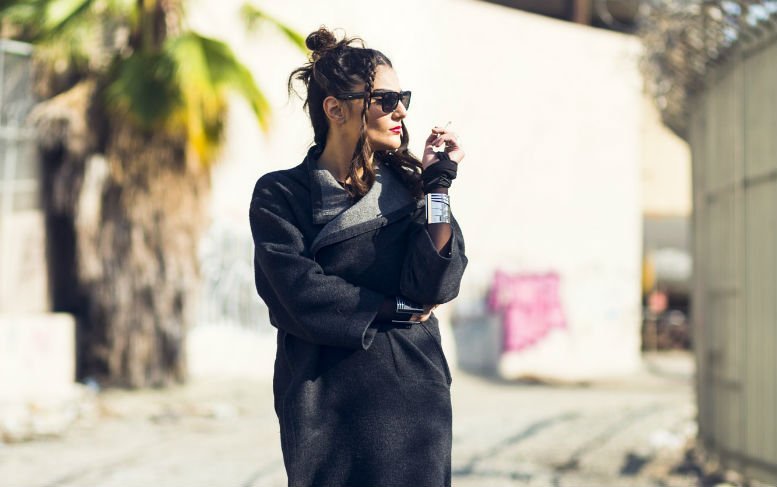 Los Angeles-based atypical and alluring songstress Ripsy May, shares her debut track ‘Black Wine’ and gives us her very first interview. “Black, white – we’ve tried to define it, but there’s no side – we’re drunk and misguided by…”

How are you today Ripsy?

I’m well thank you. How are you?

Im fine thanks Rip 🙂 Can you reveal 5 things we should really know about you?

I love drinking coffee, and eating cake. I don’t like liquorice. My real name is Ripsime. This is my first ever interview. And I’m typing this at 03.11 (AM).

Ethnically Armenian, but raised in England.

Music? I don’t think I could pinpoint a start date – I’ve always listened to music, and celebrated it. When I decided I was going to focus my heart on it completely – and pursue as a career was about two years ago.

Can you talk about your debut track ‘Black Wine’?

It’s funny because ‘Black Wine’ doesn’t sound like anything I’ve ever written – totally different to my other songs (at least in my eyes – so I was hesitant to put it out).

It’s a fun song but it wasn’t ripped from my heart – and didn’t write it out of needing it to calm me or make me feel better – it was genuinely something my friend and I had fun with.

The song initially came from two chords on the guitar. I lay the main melody down and started to build up my vocals around it.

I love harmonies, and arranging vocals – so I really worked on thickening up the song with vocals and then having fun with the production (Hi Vud!).

The song comes from a poem I wrote a while back about race divide, how we’ve tried to define, and divide it. How it’s hard to define yourself, but we are made constantly to do so. I could
go on – but take a listen.

And the video for it?

The video was actually shot before the song. My friends’ Luis and Tigran had just finished a shoot – and had a Red camera that they rented over night, and a studio.

The invited all our friends over late at night – and we shot random footage with paint, and just had fun.

Later Tigran put the footage to my song when it was finished and thought it worked so well that all three of us edited the footage collaboratively. I don’t want to talk too much about it, because I want you to have your own experience of it.

What is your first memory of wanting to be a singer/artist?

I don’t think I have one. I’ve always loved to create and imagine. I felt like being a musician or doing anything in music was just impossible to me.

I loved music so much that I felt that anyone who was a musician was godly – and I was neither cool enough, nor good enough to pursue it as a career. It was actually my friend and current manager Gabby (Endacott) who encouraged me to give it a shot.

Who are your music and non-music influences?

I have no idea. New Orleans was a big part of my life. My father lived there for a while, and was a guru when it came to jazz – so I guess you could say jazz, nola food and culture.

I loved, and still love Bing Crosby, as well as the Bee Gees, Queen, Fats Waller and Pink Floyd. Although the list is endless. Non-musically – Oscar Wilde springs to mind right now!

Who/what has helped you the most to get to where you are today?

Understanding there is no alternative to hard work.

What’s the idea behind your first EP (due soon).

I can’t exactly specify – because so far I have a bunch of songs that I really love, and it’s figuring out which ones are going to go on the EP, as a body of work.

Perhaps it could be an eclectic mix of songs, I’d be open to that too, but I want to take the music back to good songs – stripped back – piano and guitar needed only. I wish I could describe the idea, but I’ll let you hear it for yourself.

Is it hard being a new artists in today’s industry?

I don’t find the ‘art’ part hard I love to create – I hate myself, I love myself, I go in and out of feeling certain ways about myself throughout the process.

The hardest part I think is the inner part – as opposed to the industry. The industry can do whatever it likes – it’s the people. So in terms of ‘industry’ – I feel like I can’t generalize on a mass of people.

But I guess for me personally is that I realize I have so much to learn, and I’m always thinking about how much I don’t know. Sometimes when I take it all in, it makes me feel stagnant and overwhelmed. I don’t want to be arrogant – because I want to learn.

But I feel the urge to follow my gut – which may go against the people that are saying ‘no’ – and inflicting opinions on what has been done before and what works. My opinion of being a ‘new artist’ – is being caught in the middle of that, so that I isolate myself a lot.

But this could be something I may have to deal with in the long run. It’s hard to answer a future question – so for now this is my reply.