Adam James, Peter Gebbie, Phil Court and Nick Iatridis-Jones, are collectively known as Liverpool-based synth/pop band NYTCLUB. ‘Dressed Up’ is their debut track, an uplifting pop gem that got our full attention.

Can you talk about the new track?

Adam: ‘Dressed Up’ I think is a great introduction to NYTCLUB. When writing I usually sit in my home studio in my room, messing around for hours with different beats and synth sounds, and if i’m lucky it will eventually spark a vocal hook or idea that i think is worth spending some time on. This one came relatively quickly and i think that is why it was an easy decision to reveal this one first. We love playing it live and open with it in our set, as it punches you in the face!

Hello FAME readers, we are NYTCLUB. We’re a 4 piece dark pop/synth band from Liverpool made up of Adam (Vocals/Synth), Pete (Guitar/Synth), Nick (Bass/Synth) and Phil (Drums). We have just released our first song ‘Dressed Up’ online and are announcing some gig dates soon around the UK. Head over to our Facebook page (Facebook.com/nytclub) and give us a ‘Like’ to keep updated on all that good stuff!

In 5 words describe your band.

Why did you decide to call the band NYTCLUB? Any interesting story behind it?

Adam: Our name came about when Pete and I first started writing together, we would always talk about our mutual disinterest for ’night clubs’ unlike most of our friends. Standing around at 3am listening to awful music that didn’t mean anything to us was a pet peeve we shared. Therefore we thought it would be funny to give ourselves that name, but create music that feels good in that environment and translates to other people in the same way. It’s next to impossible to think of a good band name, that’s why we chose NYTCLUB; as long as the music is good, it’s all good!

How did you form the band?

Adam: I used to sing in bands back in school, and when my last band broke up at the end of school I took a break and focused on writing. Fast forward a couple of years and I was hungry to get back on stage and be part of a band, so I started writing some material. I met Pete online through a music website, (basically a dating site for musicians) in late 2013. Since then we focused on writing as much strong material as we could and developing the vision for what we wanted the band to be. I knew our drummer Phil through a mutual friend so we brought him into the equation, and we added Nick who I had been best pals with for 7 years on bass shortly after. 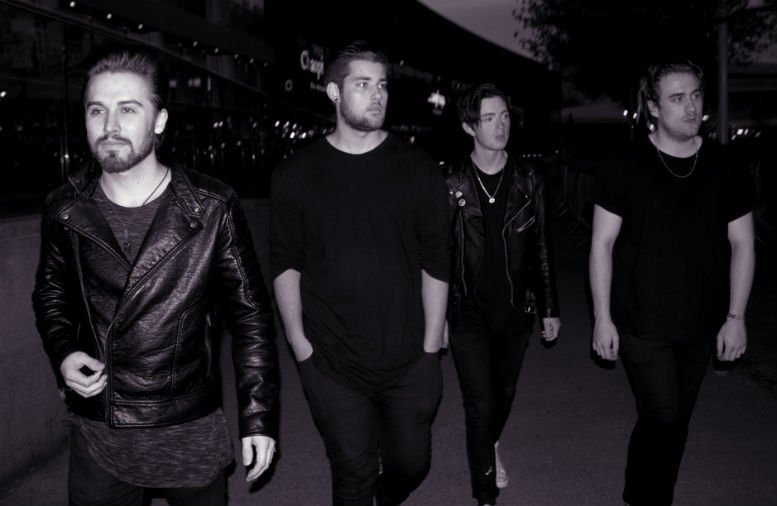 When and where can we you see you live and…tell us why we should be there.

Adam: NYTCLUB is ALL about the live show, thats what we enjoy most and why we do it. So really, you’d be doing yourself an injustice if you like the track and don’t come and see it live 😉 We are about to release the main bulk of our UK dates for the next few months but at the moment we can reveal we are playing at:

Who are your musical influences?

Adam: I grew up listening to a lot of Pop, but at the same time I was also drawn to 80s hip hop (N.W.A, run DMC). Michael Jackson and The Beatles were always on repeat in my house. I love watching bands live and bands with great front men such as Arctic monkeys, Foster the people, Coldplay, Queen, all inspire me. I also think there are some great female artists out there now who are killing the game like Sia, Lana Del Rey and Lorde.

Pete: I have always idolised classic rock guitarists from when I started learning to play such as Slash and Jimmy Page. Noughties rock and pop in general i think is also a massive influence to me, bands such as Hands Like Houses, The Wombats and Twenty One Pilots.

Phil: Everything from Cradle of Filth to Hardwell, Yelawolf to Dave Matthews Band and everything good in between. It all started with blink-182 and Green Day though. Rick Astley is king.

Nick: 60s music has always been big on my influences, but Noughties indie music such as The Libertines, Arctic Monkeys, The Coral etc are what i grew up on mainly.

Adam: Collectively as a band we listen to a lot of current Pop, chart stuff as well as hip hop, rock, pop punk, house, dance.