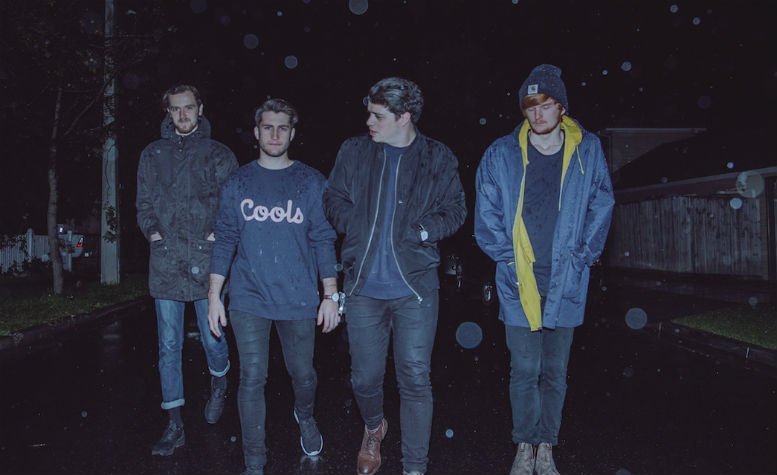 “The unique thing about KINGS. is that all the music is DIY from home. We have a little rehearsal studio built in my garage and all of the records come together on my laptop. In our spare time we’ll be making more music and producing for other artists” says Hayden. ‘(u) West Coast’ is the flawless follow up to their previous equally beauteous tune ‘Whispers’.

Hello Hayden 🙂 How are you today?

Our guitarist Sam came up with the name. When we started creating music together we saw the opportunity to take a leap and try something new. He decided then and there that KINGS. would be the best representation for what we were setting out to achieve.

The four of us all came to know each other through music. We were all driving our own projects with others that just weren’t in it as deep as we were. It was the mutual passion that brought us together to create something new that we were all inspired by and equally keen to push as far as we possibly can.

Can you describe in few words KINGS. musical ethos?

The lyrics in (u) West Coast are nostalgia for me; I think it’s such a cool feeling, so much so that the artwork was an old photo from a party first summer out of High School. The track came together out of a jam in preparation for St Kilda Festival earlier this year. We wanted to open our set with something punchy. It was so well received that day, we decided to pursue it as the single release.

And the (stunning) lyric video?

The lyric video is really there to set a pleasing scene for people to see as they hear the song for the first time. We wanted to give people a really accessible way to connect with the imagery and lyrical content within the record.

What’s the best and worst thing about being a Melbourne-based band?

Best is that we have one of the most renowned music and arts scenes in the world. There’s always good music to see and venues with plenty of character.

There’s not much you can complain about really, maybe the 6 colder months of the year.

What’s the music scene like in Melbourne these days?

There are many of fresh new artists springing up so it’s a tough competition to stand out. Something we’ve taken note of in Melbourne rather than anywhere else we have toured, is that because there’s so much to do here on a night out, it’s cool to pub-crawl between a few venues in one night. This makes it tough for supporting artists because most of the crowd will roll through just to see the main act.

My big 2 for a while have been Frank Ocean and Bon Iver, others that heavily inspire my work ethic are Drake and his producer Noah “40,” Kevin Parker and Donald Glover (Childish Gambino). There’s really not much outside of the musical realm that I will be inspired by specifically.

Are you planning any live shows (in UK, Ireland or EU) and what will they be like?

We’ll definitely have to tackle Australia first; our music has only taken us as far as Sydney and Adelaide. We’re still pretty fresh and we’re pushing for a big future.