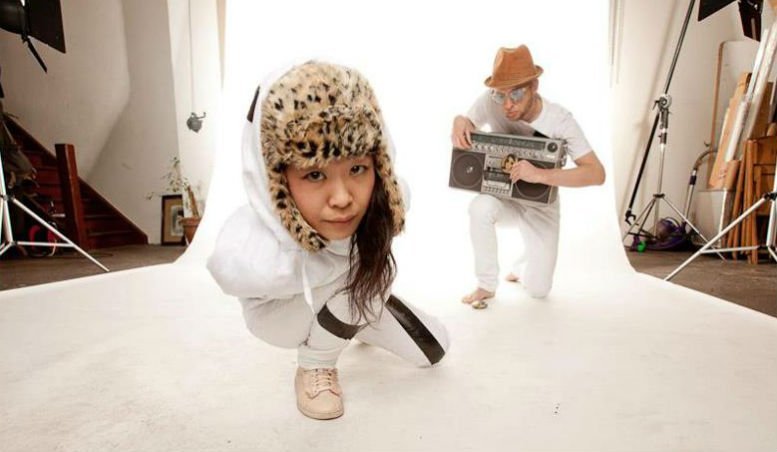 The dynamic duo from Zurich and Tokyo – Tim and Puma Mimi – open up about their collaboration for the soundtrack of film festival favorites animation experience called ‘Ivan’s Need’, created by Veronica L. Montaño, Manuela Leuenberger and Lukas Suter. The movie is about a baker’s apprentice who is obsessed with kneading dough and he meets a woman with huge breasts…

‘Dupi Dough’ is the vividly bizarre electro lead single, from their equally off the wall record, called ‘Der Die Das’ (out 27.01.2017 on Mouthwatering Records). The track comes with a smart Kid Schurke Remix.

So this song was written for an animation film, tell me about how this collaboration came about?

It came out of nowhere, as it seems to happen often in the internet-age. They heard our music somewhere and thought our crazy Japanese touch could fit to their movie.

Is it hard to write to someone else’s ideas? Is it any different from how you normally write songs?

Yeah, often it’s hard, especially if the filmmakers send some suggestions with accordeon and violins and we have to do something „similar“. But in this case, they gave us freedom.

They simply said “go as crazy as you can”. So we did.

What did you think when you first saw the movie?

We first got the script and were a bit surprised by the weird plot: a baker’s apprentice who is obsessed with kneading dough and he meets a woman with big long tits… But because we never did music for an animation movie, we said “ok, let’s do it”. And, then, we saw the animatic story board without movements and sounds. It looked bit boring.

Only when all the sound design, the moves and the music came together in the end, it suddenly got these shiver moments. Btw: Mimi acted also for the female character, Alva’s voice. Sexy sexy!

Are you surprised that it has received so many awards?

Yeah, of course, we are not familiar with this bubble. Once, we were lying by the lake of Zurich and got a phone call from the animation team, if we have time that night at 7pm.

They said, there is the Zurich Youth Filmfestival award ceremony, but all of the team members can’t come. There is also free food. So we went. Surprisingly, the animation won the first prize. So, we went on stage, got a nice designed tiger trophy and an envelope with 1000.- sfr.

You have a record coming out soon, correct?

True. It comes on 27 January 2017 on Mouthwatering Records.

What can we expect?

A colorful sound and song-collection with many guests, e.g. Boris Blank (Yello), Seelenluft, Ngoma Makhosi (a rapper from Johannesburg ZA), IOKOI (a singer from Milano) and Michal Ho (None of Them, Zurich).

And btw. are you guys still playing on vegetables?

Gurk never dies! Of course, we keep the electronic music dirty, at least my synthesizer is quite sticky from all the cucumber juice dripping down during the shows.