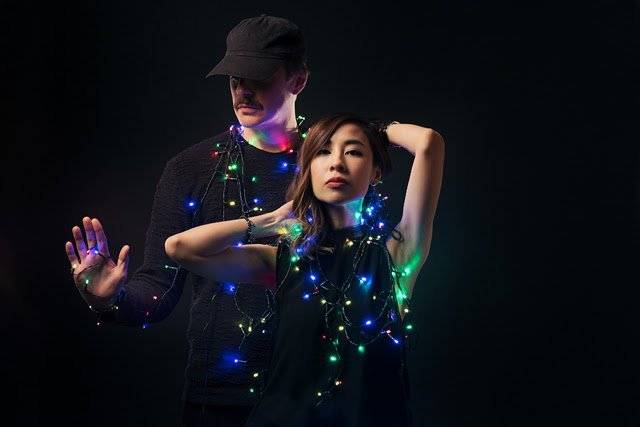 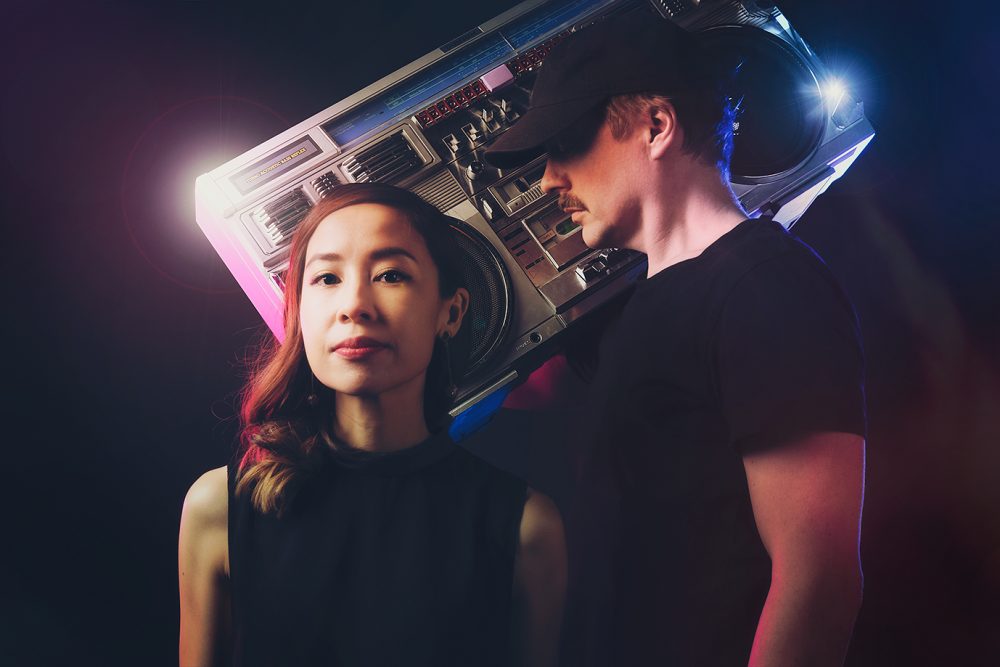 Stockholm/Detroit duo Djustin – Johan Angergard and Rose Suau – release their new album ‘Voyagers’ on May 5th via Labrador Records. Before that, they premiere synthpop pearl ‘Birthday’ and talk about chocolate, sophisticated and visionary soundscapes, “Future Love” and ask meaningful questions like…”Why do we try so hard to work at unfulfilling stuff?”

R: Same thing that’s usually on my mind – some chocolate would be good right now.

J: I’m wondering how I should spend the summer and thinking it’d be nice to buy a trumpet or a saxophone or some other instrument I have no idea how to use.

Tell us everything we need to know about your album track ‘Birthday’.

R: Johan might not recall, but he had actually sent me the demo track for the music on this around the time of both of our birthdays (we are 13 days apart in age). It dawned on me that we were going to be another year older, yet here we were now, doing Djustin together at this point in our paths. It was a touchstone of sorts, and somehow I felt it had strong significance from a life perspective. By then, I was taking a mental inventory and was in full-on existential crisis mode. I think ‘Birthday’ was written, perhaps rhetorically, as my way of asking what the meaning and value is of anything we do in our lives at any given moment.

Why do we try so hard to work at unfulfilling stuff, deny ourselves the ability to truly feel anything real, go out of our way to love people that are emotionally unavailable etc…?

What is the point and why does it matter? What do we gain, and is regret just inevitable? I suppose when you unpack all of that, it turns out to be a bittersweet and rather depressing song.

R: When Johan is in songwriting mode, he’ll send me demo music tracks along with an idea for the melody line of him singing. Sometimes I get very basic snippets of ideas, other times I get ideas that are a little further developed. I think one of Johan’s greatest strengths is that he tends to wear his heart on his sleeve in the songwriting process. I’m
pick up on. I consider myself to be highly emphatic, so, it’s a bit like reading energy to me.

Kind of like feeling around for something in the dark until you find it. From a lyrical standpoint, there has to be some sort of emotional spark inherently present in the song – love, anger, fear, desire, whatever it is, I need to get it in order to start forming a back-story about it. After lyrics are finished, vocals are recorded in our home studio here in Detroit. Then they are sent off to Johan in Stockholm to work his production magic, et voila, a Djustin song comes to life!”

How did you meet?  And when did you form Djustin?

When Johan asked me to form Djustin with him in September 2015, I thought it was perfect timing personally, as I was ready to take on a new musical challenge/project. We finally met in Stockholm that October over copious amounts of red wine and lovely conversation. For me, meeting Johan felt like reuniting with a nursery school mate. It was both strangely familiar and comforting, with lots of shared history running underneath us. You can probably ask Johan what exactly prompted him to ask me to start Djustin, but in many ways, it seemed inevitable to happen sooner or later. 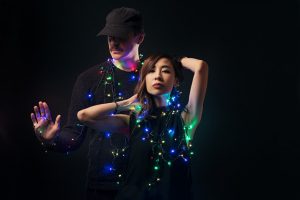 J: I needed a new musical outlet; a band where I could focus on producing and writing the music and melodies and leave the lyrical part and the singing to someone else. Someone
inspired and like-minded. Rose seemed like the obvious person to ask so I just dropped her an email. Thankfully, she was kind enough to join!

R: We don’t have any shows planned right now, but it’s definitely something we’d like to do in the future, for the right venue. I’m a bit of a control freak and I very much like the idea of a performance being more of a holistic experience, fully produced, and presented with visuals that reinforce or compliment the ideas in our music. On the other hand, I’m not thrilled by the idea of performing for a room full of random brats who, at best, vaguely know one of our songs and insist on chatting during the whole show. I’ve already experienced that side of performance and it’s not worth my time and effort. So I guess if you are an intelligent and polite adult willing to travel to a lovely destination, of course you should come and see us and we will make it worth your while.

R: I’m almost certain I was a cat in another life, as I have an affinity for them, and they also seem to be drawn to me. However, if I had to pick a spirit animal this very moment, it would be a raven because of their intelligence, and their wise and mysterious persona.

R: Cigarettes After Sex are great to unwind to. I’m also anxiously awaiting the new Violents album, and I love a French band called ‘Papooz’ so so much. As a Detroit girl, I have to listen to Octave One and definitely Rebekah when I run. On the other end of the spectrum, I listen to a lot of Chakra cleansing music, Tibetan singing bowl music and binaural beats to meditate and fall asleep to.

J: I love S.E. Rogie’s stuff from the 60’s. He’s from Sierra Leone and has a wonderful warm and cosy sound. I’m also listening a lot to Ethiopian music from the 70’s and 80’s. Especially Samuel Belay is amazing.

R: The first album I purchased using my own allowance money was Erasure’s ‘Wonderland’ vinyl LP. I really loved the songs ‘My Heart, so Blue’ and ‘Oh, L’Amour’ that record got some pretty good scratches from playing those songs so much.

J: I bought two vinyl albums at the same time; one of them was a band called Noice singing in Swedish about how it was being a teenager in Stockholm hanging out in the subway. The other one was Frida from Abba’s solo album ‘Something Going On’. I still love the track ‘I know there’s something going on’. It’s so greatly produced by Phil Collins I, for a short time, thought that Phil Collins was a good artist.

R: I would say my style is modern and sometimes androgynous with a little quirk. I tend to favor clothing that has simple, clean lines and organic materials. I’m pretty small in stature, so I avoid wearing too many layers. I wear a ton of black and grey because it’s so easy to mix and match pieces, and always looks polished to me. I guess you could call it grey modern.