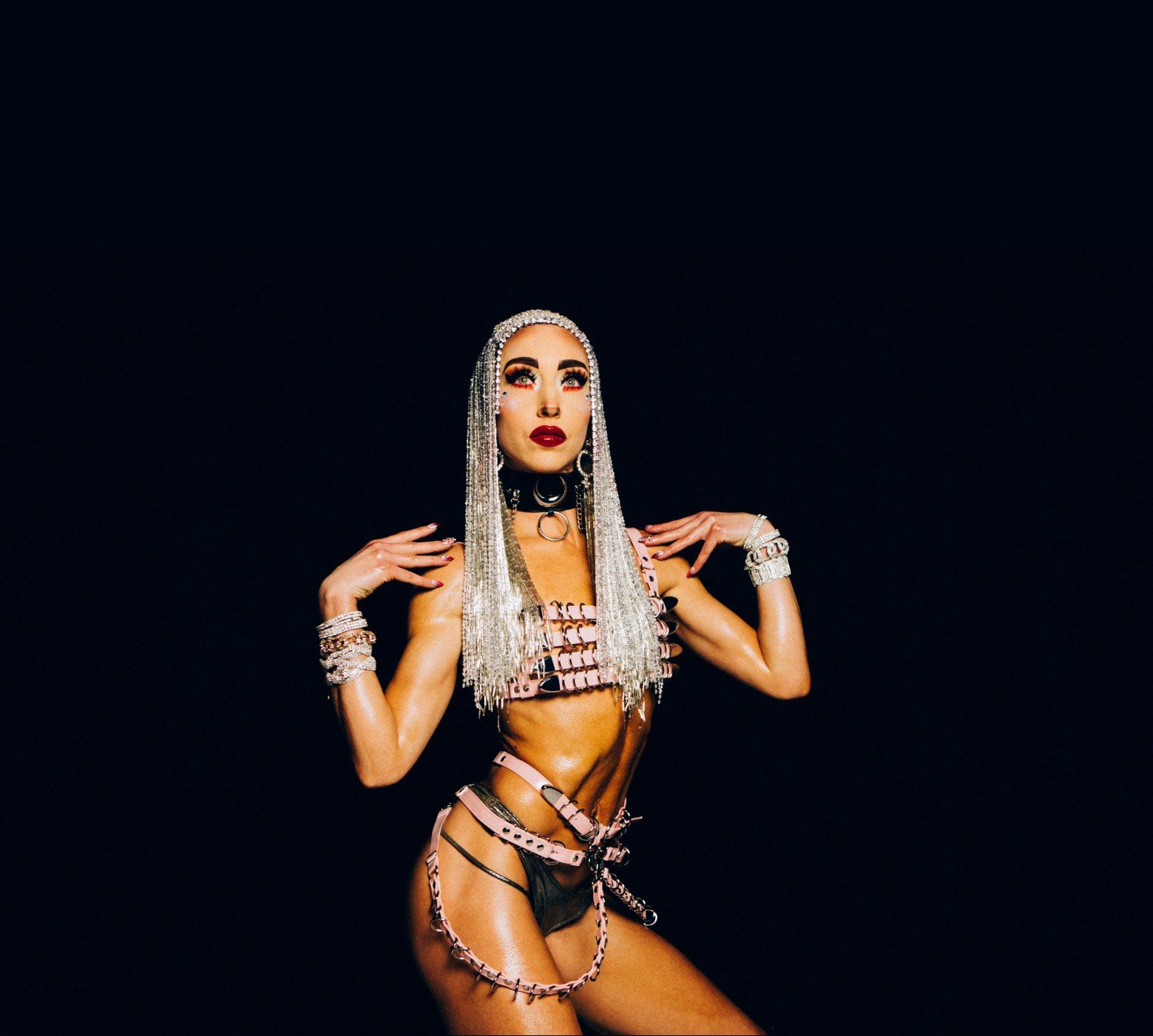 Our favourite cyper-sexual goddess is BACK with a brand new song and video KUSJE. We chat to DOLLY BING BING about her latest creative adventure.

Hi Dolly! KUSJE is an explosive sounding pop song, that’s quite different from your last single Eat Me. What is the song all about?

For KUSJE I really wanted to write a song that would sound like a ‘deadly sexy radio-hit-club-banger’. I was loosely inspired by the boppy vibes and tacky sounds from Justin Timberlake’s and Britney Spears’ notorious 2000’s-Era, music I grew up on and created little choreographies to as a teenager. KUSJE is a light-hearted, sensual clubby pop track yet it shakes up a universal desire rather tangibly up to date in our shared world as a global village, advanced by the tricks, taps and clicks of hardstyle cyberlife (and certainly now in current lockdown-quarantine times): it sings about online love and how to make the fantasies on the screen and the pleasures in the phone come true. Like taking a plane across the world to your lover (something I actually really did). ‘We’re deep inside the wwweb …we had to make it true, got my ticket to you, I just landed, we took off, our desires they will never come down …’ With its rhythmically rushing sighs, a nasty giggle, the filthy, sticky beat and the special effects on my voice as if I’m moaning through the phone, this deeply physical song radiates tease, sex, exhibitionism and temptation beyond the digital limitations of the internet: ‘You get a little taste … come get a little bit of me …’ The song is both in English as well as in Dutch, my native language, making it catchy as well as alien. The chorus unfolds an almost childish game with the sweetness of throwing little kisses at my lover.

In the video, you play a sword-wielding vigilante type – was that fun to make? Tell us a bit more about it.

Yes this was a childhood dream come true! The video is inspired by the different layers bubbling around in DOLLY’s futuristic ‘Battle Angel World’ but also by the related dystopian universes of the movie series Mad Max and 90’s cartoon Tank Girl. The sci-fi fantasy goddesses and warrior action heroines that are often shown in the beautiful drawings, comic series and manga illustrations as published in the famous Heavy Metal Magazine, have always been creatures I wanted to be. In this video I could bring them to life. Not just through my looks but by riding on a speedy motorbike, performing on the roof of a massive Hummer, competing with a bodybuilder, leading my ‘diamond dirt gang’ through the massive dumpsite with flashy dance and choreographies and protect them with my shiny sword. It gave me the kicks! Yet it was very challenging and even dangerous to film this video as the dumpsite activities were still going on and all the staff there were working while we were doing our shoot and filming our stunts. They were driving trucks around, working and moving cranes, transporting metal and huge pieces and large amounts of trash. Clouds of metal dust were flying around, and on top of that I had to perform my own stunts: like dancing on top of a driving Hummer, swordfighting, climbing up on piles of metal trash and, the most terrifying stunt I have ever done in my entire life, driving around between the dumpsite trucks on the back of a motorbike driven by a worldchampion dirtbike rider (I’m a tough lady!) at 200km/h speed, unprotected, in my lingerie outfit. It felt like all the air was pushed out of my lungs and my adrenaline levels rose to max capacity. I never wish to repeat a stunt like that! But: anything for the arts!

You describe the video as post-apocalyptic or post-corona. How do you think the world will change for DOLLY after the pandemic? And are there any positives you can take from this period?

I have already suffered quite some tragedy in my life as I am just crawling out of a dark period where I had to take care of my terminally ill husband for years and see him die, I was used to being ‘locked down’ and cancel all of my plans and, as a result, I was used to finding happiness in the smallest things. From my past I learned to never let go of your dreams and keep on planning and building towards a future, even when the situation is horrible and does not seem to offer any perspective, or when it does not show an end, a purpose and does not leave any hope. I never stopped trying to look at the world in the way children do and to deeply feel alive, no matter how often the plans and ideas I had needed to move over because of the unexpected happening again. I would have died too if I stopped thinking about the things I would do soon. I hope that many people now, through their experiences of being ‘locked down’, have seen how to value and cherish the here-and-now, the small pieces of luck, the walk in the park, the smile of your friend you are missing, the taste of a strawberry, a ray of sunlight. I hope that this renewed consciousness makes people less greedy and not just always desiring more and instead being happy with what they already have. This attitude could reflect in our economic behaviour and in us treating the world as a precious jewel. This period threw me even more upon myself then before and I was happy to observe that one does not need much in order to live a fulfilling life: to me this was a time to dig deep into the purest loneliness of myself and to discover how much beauty I can offer myself from nothing else but from what I have inside: imagination, dreams, music, art. We don’t need distractions, we don’t need to buy, we don’t need cars, we don’t have to pollute this earth … The solidarity that rose amongst people was a beautiful thing to observe, the creative solutions people came up with to stay safe and keep distance yet be in touch … I am hoping that this creative spirit and the awareness of preciousness and care for what we took for granted before will stay awake. We CAN change the tracks of our capitalist rollercoaster and go for a less profit based ideology. We were forced by a virus to do so. Can we do it also because our spirit sees that we were ruining the planet?

Your look and sound is very bold. Where do you get your inspiration from?

I am styling most of the shoots and visuals we create myself, as I have a very strong vision on shaping my visual identity and looks. Fashion is a tool of expression, in service of accentuating Dolly’s extremely trained athlete body and complementing her bold make up doll face and shaved head. Dolly’s taste is dashing pop – think Michael Jackson or Madonna – cross-pollinated with cyberfuturism, alien manga-vibes, punk, dark gothic feels, metal fantasy pulp looks, bondage lingerie, chokers, belts, loads of jewels, urban coolness and more lunatic outsider dungeon style vibes, all covered a in a thick icing of glam, gloss, shine and shimmer. Clothing is not the starting point, my body is. Grace Jones is a huge role model, as is David Bowie. Being heroic and iconic are much more important to me than being trendy. Epic movie and manga characters with masculine or phallic qualities, like ‘Alita’, ‘Casca’ (Berserk) or ‘Tank Girl’, as well as Grecian temple sculptures or Egyptian gods, Roman gladiators and Olympic warriors all come to life in Dolly, yet they are complemented by her aura of sweetness, innocence and kawaii, mostly reflected in her Disney-like princess face.

We look forward to the day we can see you perform live. What is a DOLLY live show like?

It is one big total experience, a full pop show I often call a contemporary Gesamtkunstwerk (pop shows are the new operas) playing with all the effects that big arena shows use: there’s first of all the music and the songs, I perform my vocals all live. I am flanked by my dancers Michael and Tine (we call ourselves the BING BING CLUB). We bring intense dance acts to each song, sexual, seductive, strong and powerful, yet very aesthetic, there is voguing and nudity, we play with our outfits and bodies, we make use of light effects, smoke, … In short: a DOLLY live show is like stepping into an otherworldly concert on a sensual futuristic planet. Every single moment is excitement, edgy and epic. As the show is so physical, filled with dance and therefor highly visual, we are a top favourite amongst concert photographers!

What’s next for you after the release of Kusje?

ABSRDST and I recently finished a second track that I will release later this year, maybe also with a special video. We are also working on new music: planned is a series of singles that in the end can form an album. To celebrate the release of KUSJE I launch next week a limited edition DOLLY T-shirt collection and a special DOLLY face-mask-scarf. For this campaign, next to myself, we asked Rinus Van de Velde to model the collection. A true honour as he is one of Belgium’s most famous and best-selling visual artists today and a close friend. I am also a visual artist and sculptor, creating works under the moniker STRIPPER ANGEL. I am working on a large scale new sculpture and also on drawings for a hentai-manga project about DOLLY (called: STRIPPER ANGEL DOLLY – ALIEN BATTLE GODDESS – THOUSAND AXES SERIES K-X: Memory and Desire). In the autumn I will appear as DOLLY in a big futuristic opera-theatre production called ‘A Revue’ by the Flemish Opera, directed by Benjamin Abel Meirhaeghe and – if Corona allows us – I am hoping to return back to the stage for big DOLLY shows very soon.