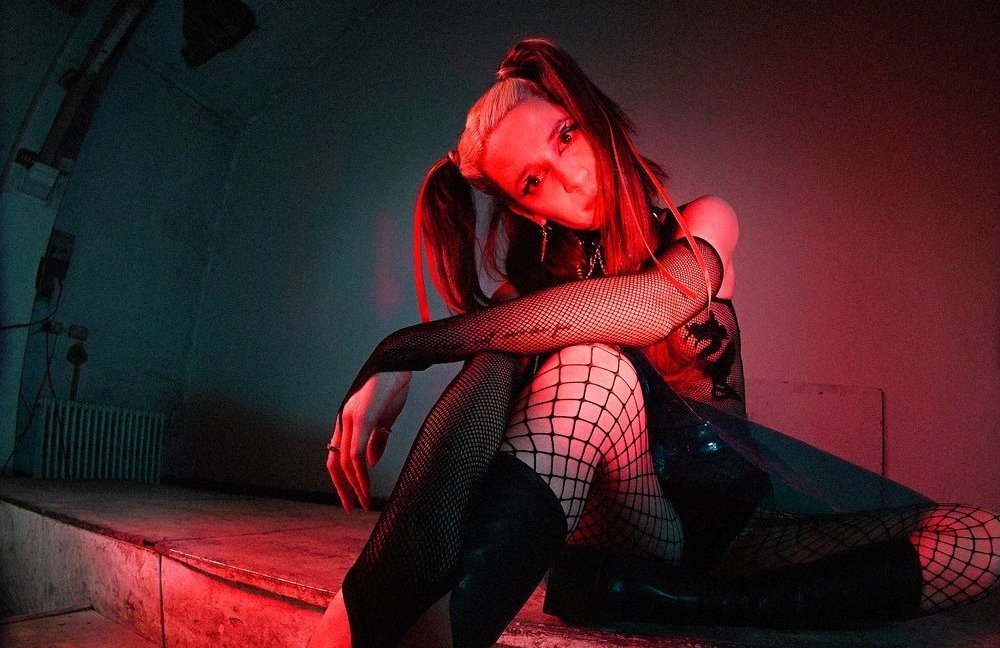 Fleur Rouge is a London-born French raised artist who seeks to blur the boundaries between dark, alternative soundscapes and hard, electric neo-synths. The future-pop star’s forthcoming debut EP What Makes You Think I Care? deals with dark themes such as emotional inaccessibility, self-indulgence, and objectifying gazes.

Lifted from the EP, the new single Cold Feet demonstrates her ability to write candid, personal lyrics that transcend into catchy electronic pop in a manner that is as abrasive as it is pleasant. The track is about the difficulties of feeling like you need to put on a mask so that nobody sees your scars or at least the ones that are visible. And finally, it is about how despite being conditioned and taught this way by society, Fleur still tries to be genuine with those around her.

Hello Fleur Rouge how are you?

You’ve released the video for the single ‘Cold Feet’, can you tell us about the themes contained within the song?

The full video drops on 3rd June! Cold Feet delves into the dark undertones of our superficial age where emotional vulnerability is scare and being unavailable has become the norm, it’s told from my perspective, I dated for a while but felt I couldn’t / didn’t want to connect on a deeper level as I didn’t have the capacity to, maybe I was jaded from previous gameboys? Who knows. I wanted to put a lighthearted flavour on the lyrics, it’s not supposed to be taken too seriously but at the same touches on the sentiment, a lot of 20-somethings feel in our digital age of fickle love that comes with dating apps.

I usually start off by picking a chord progression I like, then I’ll have an idea for a song and then I’ll start singing melodies that come into my head over the chords until I find a melody I think’s strong, once I’ve figured out a rough structure I’ll brainstorm the lyrics. Lyrics always take longer for me as I want it to have a deeper meaning to it.

Are you dropping a video? If so, what was the concept behind the video?

Yeah I am! So we shot the video at Antwerp Mansion, I wanted a creepy grunge aesthetic as I feel like it suits the track. It’s a story about getting cold feet in relationships and being emotionally unavailable. We used different rooms within the mansion to tell the story and I’ve got a mate of mine playing a guy I’m casually dating in the story.

As a London-born, French-raised, Manchester-based artist, does your nomadic life influence the kind of music you produce?

I think being half French definitely has. This EP is the first time I’ve used French lyrics in my songs, I love the way Lolo Zouai switches between French and English, I want to do more of that in my songs.

How has the music industry changed since you began playing?

I feel like social media has become central to an artists success for obvious reasons. Having clout on tiktok seems to be what interests a lot of labels in the industry.I understand why but sometimes it does feel like it’s more about that, than the actual music.

I try to incorporate a few diff genres into my sound to keep the interest. The new EP’s a mix of pop and future hard-hitting beats, I’m really into GIRLI, Cody Frost, UPSAHL, they’ve all got brutally honest lyrics matched with the twitchy industrial sounds that make the music feel like it has more depth to it both sonically and lyrically.

What can audiences expect from a Fleur Rouge live performance?

Performing live is my favourite, I bring a lot of energy! Although the songs are dark, the production has an industrial quality that slaps hard. I don’t take myself too seriously when performing and will defo be chatting in between songs, ya know give a bit of context to the crowd.

I’ve got the rest of this EP coming out! It’s my first one so I’m excited to be finally dropping a body of work that’s my best stuff yet. It’s a darker vibe with a future pop production that really hits hard.