Throwing guitars and autotune out the window, six killer musicians, five dapper suits, irresistible songs, and one vintage organ is all that Fitz and The Tantrums need. 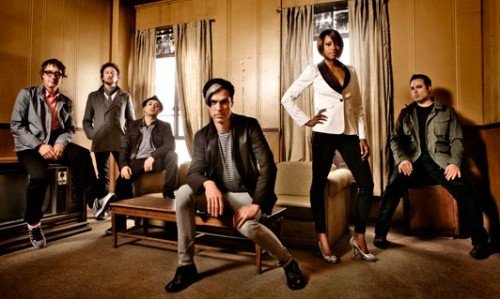 Drawing on a melting pot of influences spanning three decades, from 60s and 70s Motown acts through to New Wave bands such as ABC, Talking Heads and Style Council, this LA based, Dangerbird Records signed band have created a classic, soul driven sound with a 21st century twist. So we had a chat with frontman Fitz.
WHO ARE THE BAND MEMBERS AND WHAT DO EACH OF YOU DO IN THE BAND?
Michael Fitzpatrick – Vocals
Noelle Scaggs- Vocals/Tamborine
James King – Saxophone and Flute
Jeremy Ruzumna – Keyboards
Joseph Karnes – Bass
John Wicks – Drums

WHAT KIND OF MUSIC DO YOU MAKE/PLAY?
Its a modern take on Motown with a little 80’s thrown in for good measure.

WHERE ARE YOU FROM?
Los Angeles

HOW DID YOU GUYS GET TOGETHER AND WHEN?
Weve been together about 2 1/2 years. I was heart broken and needed to pour my heart into something. I started working on the first songs for Fitz and the Tantrums and called on my college friend James King to help. I said i wanted a great female singer to compliment the tracks and he Introduced me to Noelle Scaggs. From there it was 5 phone calls and here we are!
WHO ARE YOUR INFLUENCES IN THE MUSIC INDUSTRY?
Anything from the Motown, Stax, Northern Soul era to Style Council, Hall and Oates and even more modern stuff like Cee Lo Green.

WHAT HAS BEEN THE HARDEST PART OF BEING IN THE BAND FOR YOU?
The endless schedule and being away from my friends, family and my cats.

TELL US A BIT ABOUT YOUR EARLY DAYS AND HOW THEY DIFFER FROM NOW?
When any band starts out its a lot of work to get anyone to pay attention and to break through the sea of other great bands out there. We would have to drive sometimes 5 hours to only have 20 people show up for our gig. Now it feels good to know that the hard work has paid off and we’ve built up a loyal fan base through blood, sweat and tears.
WHAT WAS THE LAST GIG YOU PLAYED, WHAT DID YOU THINK OF IT?
We came back home to Los Angeles after touring non-stop for the last 11 months to a sold out show in our home town. It was a pretty special night for us and we wanted to do something unique and different and we were lucky enough to have a full horn section and string quartet play the concert with us. As soon as i heard the strings during rehearsal i almost cried.

HAVE YOU ANY FORTHCOMING GIGS IN UK/IRELAND?
We are playing Pukklepop, Lowlands and then V Festival in UK. We were over in London back in May and had such a blast playing Koko Club NME. Alot of music Im inspired by comes from the UK and its an honor to play here…

WHAT’S THE MOST SUCCESSFUL THING YOU GUYS HAVE DONE TO DATE?
I make a pretty mean grill cheese sandwich!

WHO HAS HELPED YOU THE MOST GET TO WHERE YOU ARE TODAY?
Weve had so many people take us under their wing from Adam Levine and Maroon 5 to Sharon Jones and The Dap Kings. But honestly its just been real people, real music lovers who have spread the word about this band so passionately that its really the foundation of all our success.

WHAT’S COMING NEXT FOR THE BAND?
Touring, Touring and more Touring.

IS IT HARD BEING A NEW BAND IN TODAY’S INDUSTRY?
Well its definitely harder to make a living but it also a more exciting time than ever. You can be in your bedroom in some small town and have fans across the globe in Bangladesh streaming your music on the interwebs. Its a new frontier and you gotta work harder than ever if you want it but there’s nothing like it in the world.

HOW IMPORTANT IS THE INTERNET AND SOCIAL NETWORK SITES TO THE SUCCESS OF YOUR BAND?
Its a huge part. Fans want a deeper connection with the bands they love. We’ve developed friendships and fostered relationships that couldn’t have been done before. Our fans are deeply invested in our day to day life of touring and making music and its a way for us to show our appreciation by staying in direct contact with them.

QUICK-FIRE QUESTIONS:
WHO’S THE MESSIEST IN THE BAND?
Me.

WHO IS HARDEST TO LIVE WITH ON TOUR?
Jeremy Ruzumna because he is constantly sanitizing.

WHO IS THE JOKER AND WHY?
James King. He has all these crazy voices and dances and can keep you entertained for hours.

WHO MOANS THE MOST?
Noelle.

WHO IS THE LOUDEST?
James when he is warming up his Saxophone.

WHO IS THE MOST ANNOYING?
Our manager because she is always giving us stuff to do!

WHAT’S THE MOST EMBARRASSING THING SOMEONE IN THE BAND HAS DONE?
I split my pants on stage in NYC and i was too afraid to turn my back to the audience cuz i couldnt remember if i wore underwear that day.
FITZ & The Tantrums single ‘Moneygrabber’ is out on 14th August and album ‘Pickin’ Up The Pieces’ is out 22nd August
fitzandthetantrums.com