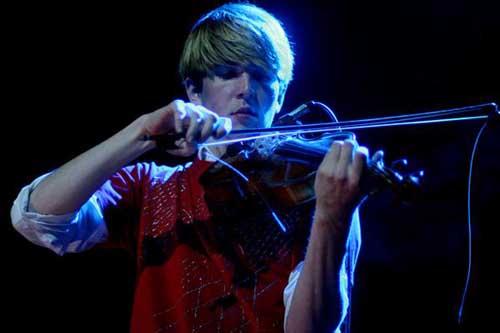 Final Fantasy aka Torontoâ€™s Owen Pallet, has played three times in Ireland to date. Back in May 2006 he made his debut as Final Fantasy in Whelanâ€™s in Dublin. An audience largely made up of curious folk looking to find more out more about the mysterious figure who had scored the string arrangements on Arcade Fireâ€™s Funeral album and who had, in the past, contributed to a variety of Canadian groups such as Picastro, Hidden Cameras, and Les Mouches. Bowled over by the outstanding display of technical musicianship, raw pop emotion and starry overhead projections, they came back in droves when he returned to the venue in October 2006. Those lucky enough to get into the venue (many were turned away) will most likely remember this performance for the rest of their lives. Meanwhile, Irish music fans have been familiarising themselves with Final Fantasyâ€™s two albums, Has A Good Home and He Poos Clouds. So much so, that by the time Pallett took to the stage at the Foggy Notions tent at Electric Picnic in September 2007, a large portion of the 1,000 plus throng were able to sing along on several of his songs. The performance was stellar. The reaction was ecstatic. Pallett stumbled off the stage declaring it was the best show he had ever played and that it would probably never be topped.