BASED on two true stories, Julie & Julia tells the stories of two women in two different times who find joy in cooking.

American housewife Julia Childs, played by the legendary Meryl Streep, is in Paris in 1948 where her husband, an exhibits officer with the United States Information Agency, was stationed.

With too much time on her hands Julia decides to learn to cook French cuisine and enrols in a course at the famous Le Cordon Bleu. Enthralled by French food, Julia became a master student and after graduating she met fellow foodies Simone Beck and Louisette Bertholle.

Simone and Louisette were writing a French cookbook for Americans and asked Julia to help make it more appealing to the US market. 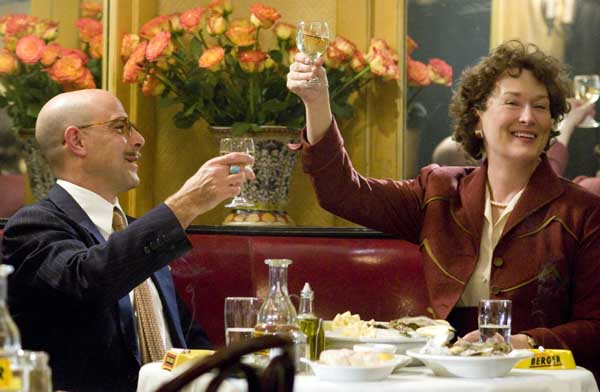 At a crossroads in her life she decides to cook all 524 recipes from Julia Child’s Mastering the Art of French Cooking in 365 days and write a blog about it.

As the blog becomes more popular, Julie becomes more obsessed with completing the task, risking her own marriage in the process.

But itâ€™s her love of Juliaâ€¦and butter that gets her through to her final recipe.

Flashing between the two womenâ€™s lives, we see how each was affected by their projects â€“ Julia struggles to get her cookbook published, while Julie tries to finally finish something.

What is clear is that both women are passionate about more than their husbands and jobs â€“ they are creative and determined to achieve something more.

For something fresh and fun, Julie & Julia should not be missed â€“ just remember to eat beforehand, you may get hungry watching the visually stunning recipes come to life.
By Andrea Clarke
FILM REVIEW: Julie & Julia
Cert: 12A
Release date: Friday 11th September
www.moviehouse.co.uk