Fighting With Wire are a fantastic success story from our very own shores. The 3 piece have recently signed a multiple album deal with Atlantic Records and are touring with there new album MAN VS MONSTE. They will be headlining in the Spring & Airbrake on Thursday 9th October.Fighting With Wire – â€˜Man vs Monsterâ€™ is the debut album from Derry trio. Forty-five minutes of razor sharp riffs colliding full force with huge melodies. Recommended for fans of Jimmy Eat World, Foo Fighters, HÃ¼sker DÃ¼ and Biffy Clyro. 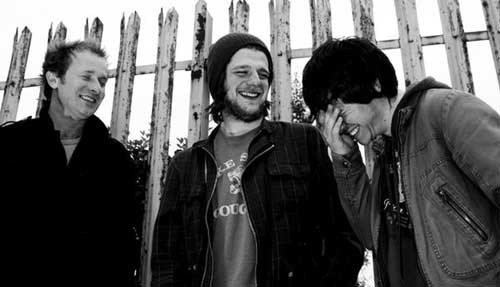 An idealistic bunch, theyâ€™ve since done what rock bands are meant to do: they wrote a bunch of songs, and took to the road. The last three years has seen them play shows with the likes of Reuben, Biffy Clyro, Million Dead, Seafood, YCNI:M and Future Of The Left, racking up hundreds of miles and honing their live show into a ferocious explosion in the process.

After putting out a number of limited edition DIY singles, they took a breather at the end of 2006 and finally started work on their long-awaited debut album. Recorded in Northern Ireland and finally completed in mid-2007, Man Vs Monster is a dynamic beast of a record â€“ raging out of your speakers one moment yet gentle and intricate the next, and all without losing focus of whatâ€™s important: the song. Whatâ€™s next for Fighting With Wire? More touring and more songs, we would expect.