By Keith Bailie
FIGHT Like Apes, who were recently nominated for Best Irish Band and Best Live Performance at this years Meteor Awards, have released a new EP intriguingly entitled David Carradine Is A Bounty Hunter Who’s Robotic Arm Hates Your Crotch. 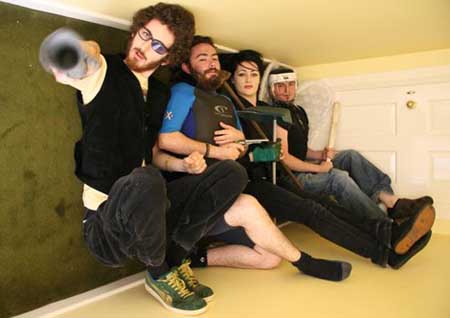 The Electro Punk rockers EP includes 4 new songs, Do You Karate?, Canhead, the brilliantly named Accidental Wrong Hole and what is probably their finest work to date, Snore Bore Whore.In recent months Fight Like Apes have toured extensively and they are set to play Belfastâ€™s Auntie Annies Porterhouse on April 10.
They played their first ever major festival with a performance at 2007’s Electric Picnic, they also impressed at HWCH and at the CMJ Music Marathon in New York.
They Irish three piece participated in the Artrocker Magazine tour and supported the excellent Detroit garage four piece the Von Bondies in the UK and Ireland.
The Apes have also released the popular Jake Summers as a 7″ vinyl in the UK with Fierce Panda’s little sister label, Cool For Cats.
With a loyal fan base and an ever-increasing following Fight Like Apes, who describe themselves as karate rock are unquestionably a band to watch out for in 2008.
Their second EP, David Carradine Is A Bounty Hunter Who’s Robotic Arm Hates Your Crotch is out now. It’s available from all the usual good record stores and tracks will also be available for download from

Tickets for Fight Like Apes at Auntie Annies are only Â£8 and are on sale at all Ticketmaster outlets.