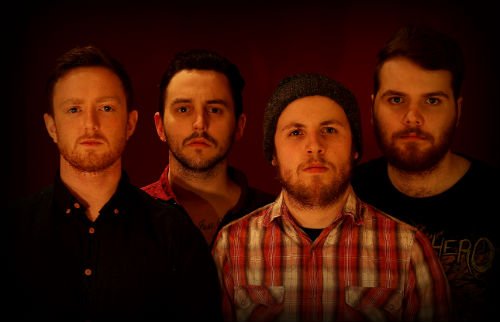 To support the release, Felix Champion will be touring Ireland in early September, followed by a UK tour at the beginning of November, to coincide with the album release, before be heading off to Europe in March 2015 and culminating with an official launch of the album taking place at Bar Bloc on 22nd November. To celebrate this announcement, the band shares as a free download ‘Canyons’, their raw, pulsating, explorative alt-rock number, lifted from the album.

Hi Felix Champion how are you?

We’re all good thanks, fully stoked on the reaction on the new material and all of the cool stuff coming up with year!

Who is Felix and what is he a champion of? Or are we way off track?

Felix champion are Ross Balsillie (Vocals and guitars), Andy Brown (vocals and drums), Dave Rees (guitars and vocals) and Michael Clark (bass and vocals). We’re champions of many many things.

You have post-hardcore/alternative rock sound – a sound that seems to be quite big in Scotland at the moment. Why is this and what is the scene like back home?

The sound we’ve got has really been a compilation of our own tastes in the band. We’ve all good a deep founded love of post hardcore bands, but we’ve really expanded it with our love of bands like Between The Buried and Me, Every Time I Die, Architects and And So I Watch You From A Far. It’s a little more proggy and heavier. A lot of bands we’re friends with in Glasgow are from a similar back ground. Glasgow is a very inclusive scene, very supportive of each other. Bands will always be at each other’s shows and sharing exciting news about each other. It’s an exciting place. 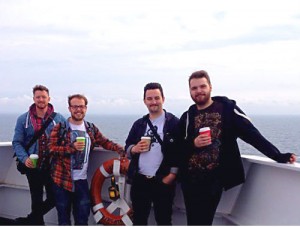 Who would you recommend from back home?

This list could go on for ages haha! If we had to put it down to a few, would definitely have to say United Fruit, Bear Arms, Dialects, Vasa and Shambles In A Husk, Algernon Doll, Bronto Skylift, Pinact and Bellow Below

‘This Lateral Life’ is out later this year. What can fans expect from the album?

This album is very much a years worth of hard work and life experience put onto tape. It’s heavy, it’s complex… But it’s also got its delicate and poppy at times. It’s a full representation of our background and interests in music and all the events leading up to the final recording. We can’t wait for it to be out!

You’ve been compared to the likes of Enter Shakiri and Gallows? Would you say this is representative of your sound and where would you say your sound fits?

Being compared to bands we’ve loved since we were teenagers is truly amazing. Gallows and Enter Shikari we’re fundamental bands for us, along with bands like Thursday, Biffy Clyro, Brand New, Alexisonfire and Sucioperro. Being compared to these guys is insane! A real compliment and exactly where we want to be!

How was the recording and writing process? How do you go about it writing as a band?

The writing process was intense. All of us contribute songwriting ideas so you can imagine 4 guys writing towards a record means a lot f dogs put forward. We had so many ideas, which we demoed meticulously, so we had an idea of all the production ideas and song structures down before we went down to record. We had something like 30 tracks ready and demoed which was cutdown to 12. We had the full record demoed, so we were very time efficient at the studio. The producer of the record, James Kenosha, was really amazing. He really understood where we came from and what we wanted to achieve from the record. Plus he produced records for Pulled Apart By Horses, Dinosaur Pile-Up, Marmozets and Sky Larkin, which was an amazing plus in our book!

You’ve played some impressive festivals. What is a Felix Champion live show like?

Festivals are all ways fun, especially in Scotland, because so many friends bands are playing too, so there are always pals to hangout with. But you also get to discover so many new bands you’ve never heard of, really fun vibe. Wickerman was an amazing festival, the tent was mobbed. Our live show is truly chaos. A lot of fun.

There are so many! Top band, probably Biffy. They were a big fundamental band for all of us, most alternative bands I think owe a nod to the lads in Biffy Clyro.

What can we expect from the band for the rest of 2014 and beyond?

This weekend were away to Northern Ireland for the first time, playing at TweedFest with our tour buddies Two Glass Eyes. Then we’ve got some cool home town shows supporting Bronto Skylift and Let’s Talk Daggers. Then it’s gearing up for the album tour in November! Next year, we’re working on heading to Europe and other exciting things. Check out our Facebook and twitter for all the updates!