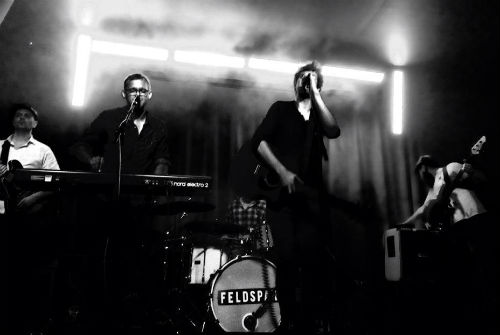 The KPH is an odd venue for a gig, tucked neatly on a corner of Ladbroke Grove in West London, it’s not exactly the scene’s most happening music hub in London but it’s cosy. Upstairs, the venue’s chairs and tables are pushed aside to make room for the bands tonight.

Catching the tail end of one of the support bands, we’re almost glad. It’s quite cringe inducing to hear the front man twitter on about their change of line-up to a crowd who remain indifferent whilst music softly plays in the background.

The crowd is a little older and blander than the usual ‘hip’ kids over on the other side of London’s trendy East, brimming with culture and attitude, whether you like that kind of thing or not. Feldspar play well. They’re…pleasant. This gig marks the end of their Compass tour – an ambitious project that saw the band release one single a month from September and tour each compass point of the UK and London. The set is patchy with the bad playing a few different tracks in-between their recently released singles.

‘Song Without A Chorus’ is graceful and beautifully played but ‘Cure For The Night’ is quite cringey. It’s like a bad indie barn dance but their fans seem to be enjoying it. This is a little like indie for accountants – think Keane at a hoe down. It’s politically fuelled ‘Hang Your Head’ that saves the set. When the band channel their Lumineers-esque influences they really come into their own.

The band come on for an encore and it’s a bit of a mess with singer Will forgetting the words but they’re in enough good company that the happy vibes save them at least. The crowd are satisfied but this is melancholic indie by numbers. There’s nothing cutting edge or stand out about Feldspar, they’re a solid band, a little predictable and…nice. And the masses do like ‘nice’ so perhaps there’s a place for them nevertheless.