Feeder return in April for another Run of shows as Renegades. Playing more new material and possibly some old fan favorites.

Fans who purchase a ticket will also get a copy of the ltd EP ‘Renegades 2’, which features 4 brand new tracks and a video of ‘Sentimental’ shot exclusively by fans who attended the first Renegades shows in Jan/Feb 2010.
The first taster of the fan-shot video can be seen below, in the form of the track ‘Renegades’ filmed at London’s Water Rats Theatre: 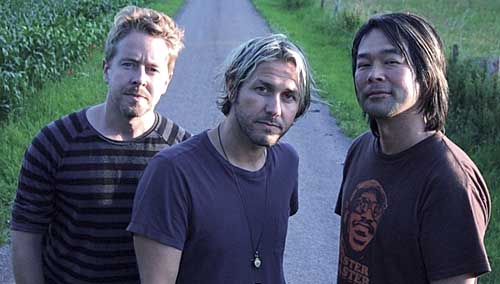 At the end of 2008 a huge chapter in Feeder’s existence came to a close having just finished a massive UK tour which had seen the band rock the whole country.

Having stayed with record label Echo since their beginnings (a rare achievement these days), the band had come to the end of their contract with the release of their sixth studio album ‘Silent Cry’ and the label was set to dissolve.

Many would view this with trepidation, but for songwriter, guitarist and vocalist Grant Nicholas this presented an incredible opportunity. With a blank page and empty diary in front of him he felt more relaxed and excited than in years. Suddenly the pressure of the usual single, album, tour schedule was alleviated and he was able to return to what he’d always done best – just write songs for himself without worrying about anything else.

He spent most of 2009 working away in his own time (with a few breaks for festivals) like he had done 18 years previously when he formed the band; no expectations, just writing for the pure joy of it. Of course, he couldn’t help but construct a gaggle of accomplished catchy songs – he’d always had an ear for a tune, as proven by the bands 2006 ‘Singles’ collection selling over half a million copies in the UK alone. But the new music he was making was less reflective, more instinctive and back to his rock roots – lots of guitars came out!

With a healthy bag of tunes, Grant, long time band member Taka Hirose and drummer Karl Brazil, decided to road test the new tracks to the people who had help elevate the band to their lofty status – the loyal fanbase who’d been checking the website for the last year wondering what was happening.

The group booked a few low key shows round the country and announced them exclusively via Feederweb.com – of course these gigs sold out immediately. They played under the name of Renegades – no old tunes (well, maybe one or two – but very old ones!) and the response was phenomenal. It was also great fun. The band hadn’t played venues this size for over a decade and it was as exciting and nerve-wracking as it had been back then.

So this next step sees the ‘Renegades’ moving up a gear into bigger venues returning to a galvanised core of fans, revitalised from the response to the initial shows and keen to spread the word. Feeder will of course return, but this is still the loud, uninhibited and exhilarated sound of Feeder doing what they want without a care in the world.
www.Feederweb.com
FEEDER RETURN AS RENEGADES
FREE EXCLUSIVE EP FOR TICKET HOLDERS AT NEW UK TOUR
Live:
15 April EDINBURGH, Cabaret Voltaire
16 April NEWCASTLE, Northumbria University
18 April SHEFFIELD, Leadmill
19 April CARDIFF, Millennium Hall
21 April PORTSMOUTH, Wedgewood Rooms
22 April LONDON, Electric Ballroom
Tickets on sale now priced Â£18.50 except London Â£22 and doors open 7.30pm each night. Ticket price includes copy of the 4 track EP ‘Renegades2’ which features 4 brand new tracks and a video of ‘Sentimental’ shot exclusively by fans who attended the first Renegades shows in Jan/Feb 2010.
www.seetickets.com/RENEGADES
www.gigsandtours.com/renegades