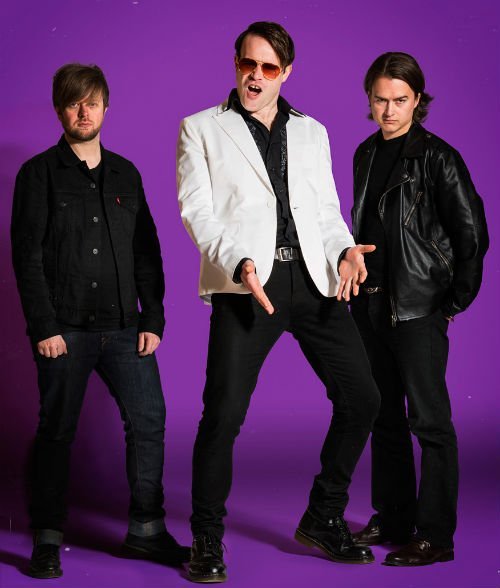 Dundee ‘Metal in denial’ trio Fath Goth – Kevin Black, Mark Keiller, Fraser Stewart – release their next single ‘Sin Altar’ on July 28th. Before the boys play at T in the Park on Saturday 12th July on the T Break stage from 11.10pm…We talk with Fraser (guitar and voice) about sexually depraved lyrical content, becoming famous as f**k and making lots of facial gurning on stage.


How have you guys been since your album ‘One Hundred Percent Suave’ was released?

Pretty good, thanks! We’ve recently returned to the gigging circuit having taken a bit of time off so it feels good to be performing on various stages again. Aside from that we’re in rude health, enjoying each other’s company and generally getting high on life as often as humanly possible.

How has the reaction to the album been?

I’d say it’s been pretty positive overall. There hasn’t been as much media coverage this time round as we’re no longer a ‘new band’, so we’re not really applicable for all the exposure features and articles we found ourselves in last year with our previous record ‘Stud’. There has also been one or two scathing reviews that have helped keep our egos in check, but for the most part people appear to enjoy our latest offering and it’s selling well so we’re happy. I definitely think it’s Fat Goth’s strongest work to date and I’d recommend anyone who likes our previous stuff to check it out.

‘Class A’ was one of the free tracks released. The video is brilliant, what was the concept behind it?

Thanks a bunch! ‘Class A’ essentially talks about the idea of an inflated ego and getting too big for one’s boots. Since we started appearing in magazines and playing higher profile shows throughout last year, I’ve taken it upon myself to constantly remind my friends and those around me that I’m now a pretty big deal and probably the closest they’ll ever get to meeting a proper celebrity. That said, I’m still the same old, down-to-earth guy I was before I became famous as fuck and I thought the video would be a good opportunity to illustrate that quality. Playing the part of a thoroughly unpleasant party-crasher was great! The reality is we get invited to parties all the time because of our celebrity stature, but poking fun at ourselves and letting all the little people think we’re the same as them is important and helps maintain a ‘human’ element to the band. 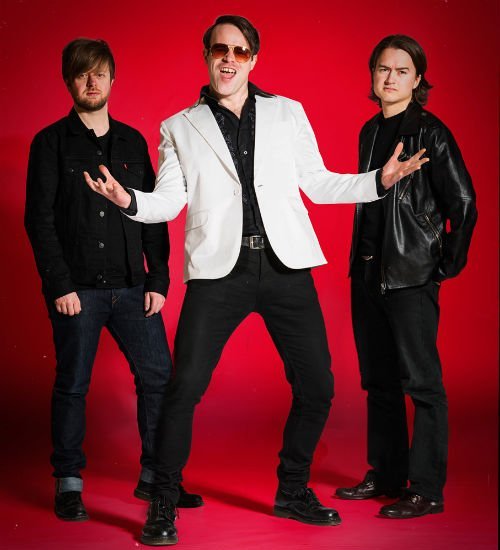 You’re about to play T in the Park this weekend, how are you feeling?

Indeed we are! We’re looking forward to gracing the T Break stage and offering up our own particular brand of nonsense rock for the audience’s consideration. We played the BBC Introducing stage last year, which was a lot of fun so fingers crossed this year will be as enjoyable an experience if not more so. If nothing else, I’m personally looking forward to sitting in the VIP area and getting served beverages by the most attractive female bar staff Scotland has to offer again!

Of all the shows you’ve played in the last 12-months, which have stood out and why?

That’s a tough question to answer! Fat Goth was ridiculously fortunate for the duration of last year and we were afford opportunities and experiences some bands and artists never manage to achieve in their whole careers. It still blows my mind when I think about it! That said, playing the first ever Arctangent festival last summer to around 800 people, many of whom were singing along to our songs was an extremely humbling experience and a definite highlight for me.

‘Sin Altar’ is the next single being released, what’s it about?

‘Sin Altar’ is a typical Fat Goth song: nasty riffs, screamy/shouty vocals and sexually depraved lyrical content are all present and correct. I find sex an infinitely fascinating subject to write about. I’m a big fan of it like most human beings, but I’m also drawn to the negative aspects and the detrimental effect it can have upon one’s psyche. There’s certainly no shortage of bands and artists who glamourise sex to ridiculous levels in popular culture. Fat Goth is simply representing the flip side of that particular coin.

What are your plans after summer?

We’re hoping to head back down south and play some English/Welsh shows before the year is out. We managed a couple of tours last year and had a great time playing to audiences up and down the country so hopefully we can get some dates booked. There’s also talk of recording a new single and releasing it on vinyl at some point, although it’s still very early days so we’ll need to see how things are later on.

The trajectory for you guys has been amazing – where do you want to go from here?

I totally agree! Like I said, we’ve been VERY lucky and it would be extremely foolish for us to take anything that’s come our way for granted. All three of us have full-time jobs and rent to pay every month and although the band makes enough to be self-sustaining at this stage, we’re still a ridiculously long way off from treating it as our full time occupation. Given the nature of our music, it’s unlikely Fat Goth will ever reach the stage where our music is on heavy rotation on mainstream daytime radio playlists. Therefore, it’s seems stupid to spend our time, money and energy trying to steer and influence popular tastes in our favour. Instead, we prefer to keep things simple by writing the best music we can, record as often as possible and play live whenever we’re free to do so. Providing we follow that proposed trajectory our audience will gradually establish itself and support what we do, which is exactly what has happened ever since Fat Goth started back in 2007.

Are there any bands you’ve not played with yet you’d like to support?

Oh yeah, loads! Personally I’d love to share a stage with the Melvins, The Jesus Lizard/Tomahawk or anything Duane Denison-related, Tilts, Mastodon, etc. I could list more but it would be never-ending!

For those who’ve not seen you live yet, what can audiences expect?

We spend a lot of time practising and refining our performances. Our music is pretty tricky to play but we enjoy the challenge and I reckon we consistently perform tight and accomplished sets at our shows. Generally speaking folk can expect loud, visceral, intense rock music with a slight twist of dark humour thrown in for good measure. Lots of facial gurning is usually a common trait too.

Fat Goth release their next single ‘Sin Altar’ on July 28th. You can also catch them at T in the Park on Saturday 12th July on the T Break stage from 11.10pm.