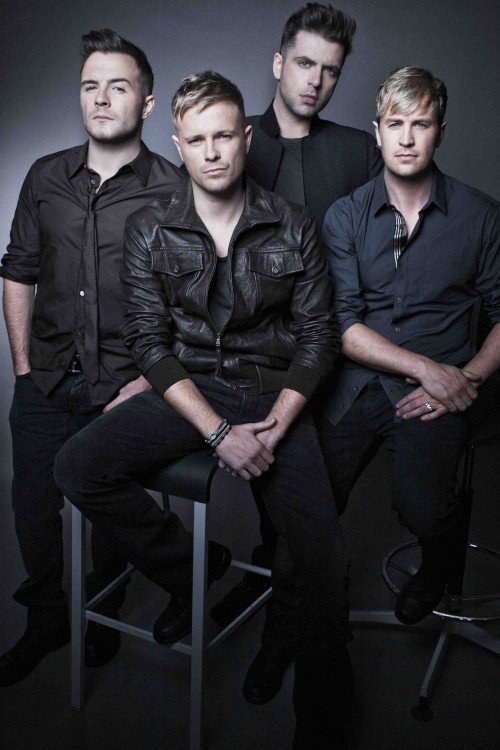 The Sun TV buzz threw Westlife a leaving do to toast the lads’ final ever TV special, cracking open the bubbly and beers, but, as Shane told TV buzz, “But not shots…One Direction can do the shots now.

It’s their turn!” Nicky revealed to TV buzz what Louis Walsh gave them for their first live gig, “Louis got us free denims and buffalo boots like Emma Bunton had – we looked like a mix of the Spice Girls and B*witched.” We can only imagine!

The Westlife boys mentioned Louis often; Shane told TV buzz, “For Louis, Westlife are the success story of his life; his pride and joy. He’s very protective of us.”

Shane explained, “He’s devastated that Westlife are ending, but he knows we’re right to leave while we’re still at the top.”

Simon Cowell has also had a huge impact on the success of Westlife, “We wouldn’t be sat here today without Simon. If Westlife ever get back together, the first person we should do it with is Simon Cowell. He picked every hit we had for 14 years.” 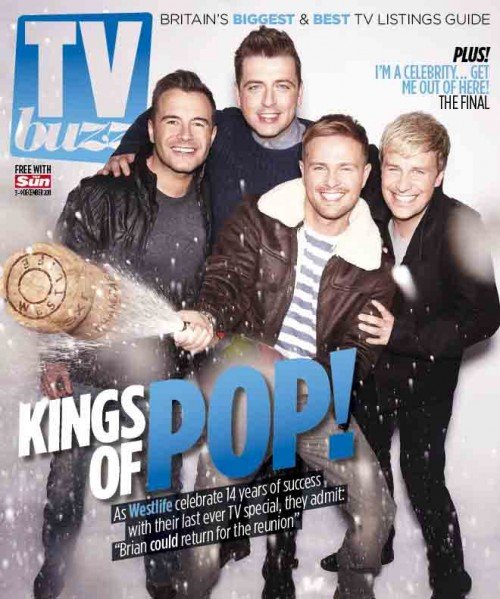 After Brian McFadden left the band they still continued going strong, Kian told TV buzz, “We might bring Brian back if he was a big as Robbie Williams…but he’s not.”

He explains, ” A part of me does think it would be a great moment for him to walk back on stage. I just don’t think that’s now – maybe in the reunion in 20 years’ time. We’ve had to make such a big decision to bring the biggest thing in our lives to an end, and it’s the four of us who have kept it together.”

Being a member of one the most famous boy bands in the UK, Kian explained the boys did get up a bit of mischief in their years, “We made a real error with a drinking session in Dublin. It was a Friday and we were supposed to fly to the UK the next morning. We cancelled the show and got battered by Louis.”

Louis must have been angry! On the subject of The X Factor, Kian revealed to TV buzz “The Wanted have a better chance than any of them [X factor contestants] because they’ve come up the ranks slowly and gone into music the normal way. I’m not sure I’d want to be part of a boy band via The X Factor.”

So what does the future hold for the Westlife boys? “Kian will be a dad in 2012”.

Shane explained, “I’d love to keep singing after Westlife. I have absolutely zero plans, as you’ve got to get a record deal first, but it’ll be sorted out over the next nine months. Deep down, we all know that we still have to work. None of us wants to retire at 32 years old.”

Mark told TV buzz what his plans are for the future, “My wedding will be next year at some point when we can do it properly. We’ve got nothing to prove to anyone, so we’ll get married in our own time, but we do want it to be as soon as possible.”

The Westlife lads will be sure to celebrate their last night together as Shane explained, “No partners, no managers, no anybody. Just us four.” Sounds like they could get up to mischief again.
Read more in The Sun TV buzz