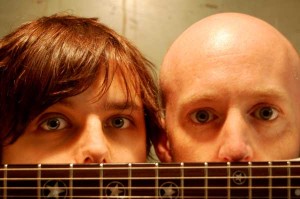 On December 19th at 11pm, Rocky and Shaun plan to take to the Spring & Airbrake stage together as Oppenheimer for the last time.

Local Belfast outfit Oppenheimer, formed in 2005 by Rocky O’Reilly & Shaun Robinson, have toured the world playing concerts with bands like They Might Be Giants, Kings Of Leon, Ok Go, The Presidents Of The USA, The Flaming Lips, and many more and have had their music used in TV shows like Ugly Betty, Gossip Girl, How I Met Your Mother and Pimp My Ride.

So Long: A Message From Oppenheimer
On December 19th at 11pm, Rocky and Shaun plan to take to the stage together as Oppenheimer for the last time.

There will be a farewell EP, a digital release at the start of 2010. A snapshot of where we had arrived at this point, as we have recently been working on new material.

Further ideas that have been worked on will accompany Rocky on his journey to a new band, which in some ways has already started, as the songs and plot lines are already underway, as anyone who has witnessed Oppenheimer recently can no doubt testify.

The reasons for this announcement are multiple yet highly intertwined. Ultimately, to be in any band you allow the band to consume you, becoming every particle of your existence, every aspect of your being, every thought that wakes you up early and every task that keeps you up late at night.

The reward for such dedication and commitment, not to mention the hardship that goes hand in hand with making music for a living is the unrivalled joy and honour that fills your mind, body and soul by getting to do all the things that you can.

The moment this joy falters, rocks or is jolted out of existence, the struggle is of no consequence or purpose.

After five years together, recording and releasing two albums, playing hundreds of shows and touring with some of the greatest bands in the world, the level of commitment, passion and drive that one of us can give to the band has changed.

It’s an understandable occurrence and one that we’re both delighted to address at this time.

Shaun has realized that in order to fulfill his hopes and dreams he needs to take a new and different path in his life.

Rocky’s ideas, dreams and notions for writing, recording and touring are more alive and vibrant than ever.

Due to these changing circumstances, we have decided to part ways.

We have no idea if we will ever work together again, recording movie soundtracks, making ambient albums or even making indie pop songs. Who knows what tomorrow holds?

For now, Oppenheimer have no plans to write, record or play together again after December 19th 2009.

Our thanks and respect for every single person in the world who has done anything to help us is overwhelming, it always has been, it always will be.