Young Knives preview their forthcoming third album, â€˜Ornaments From The Silver Arcadeâ€™, with a new single on 21stÂ March. 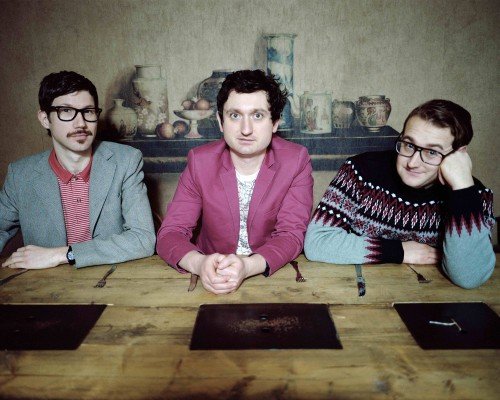 â€˜Love My Nameâ€™, as with the rest of the album, was recorded in Los Angeles under the production guidance of NickÂ Launay (PIL, Nick Cave, Arcade Fire and many more) and reiterates Young Knives unerring ability for effortless,Â intelligent pop songs.
Young Knives made an immediate mark on the UK scene with the release of debut album â€˜Voices Of Animals and Menâ€™ in 2006, scoring the band a Mercury Music Prize nomination.

As the band earned themselves a well deserved reputation for compelling live shows, Young Knives defined themselves as stood apart from the pack, eschewing the prevalent 60â€™s obsessions with music that drew from a varied melting pot of Post Punk, Krautrock and British Pyschedelia.

Those influences flowered fully on second album, â€˜Superabundanceâ€™ with sleeper hit â€˜Turn Tailâ€™ marking Young Knives as more than just another â€˜promisingâ€™ act and the likes of â€˜Up All Nightâ€™ once again demonstrating a band inclined towards the intelligent rather than the obvious.

â€˜Love My Nameâ€™ is released on 21st March on 7â€ and digital download with unheard, exclusive tracks completing the package, formats are as follows:

The new album from Young Knives, â€˜Ornaments From The Silver Arcadeâ€™ follows on 4th April.
www.myspace.com/theyoungknives