Forget all those Dubstep compilations that are flying around, this one is the real deal! The first CD album to come on legendary DJ N-Type’s Wheel & Deal label. 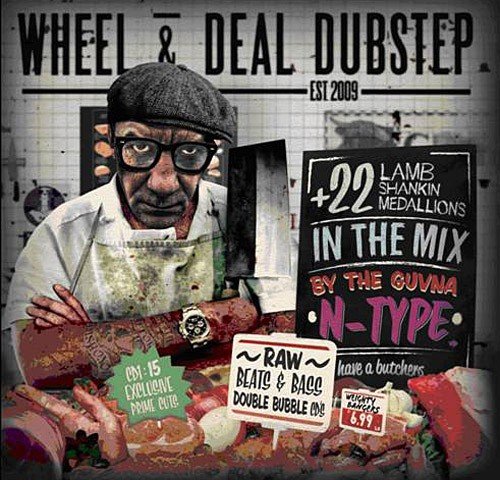 CD 1 is a collection of 15 unreleased Wheel & Deal A-side tracks which have been a massive feature in N-type’s dubplate arsenal, both in the dance and on his Rinse FM radio show. Staying true to the original roots of real dubstep, artists include NType & The Others, Coki, DJG & Kutz, Benton, Seven, LX One, Ben Verse, DJ Madd, Matt U, Phaelah, K-aze aka Lemon D, Slaughter mob, and many more showcasing the true sound of Wheel & Deal Dubstep.

Tracks include collaboration’s from N-Type & The Others with previously unreleased club smash ‘Shadow’ and San Francisco’s DJG vs Croydon’s Kutz on the warped ‘Hella Tight’. One of dubstep’s most innovative producers DMZ’s Coki, brings another classic ‘Madman’ which has been tearing up dance floors worldwide.

Pendulum’s Ben Verse lays down his classic, deep, dark & dangerous sounds with ‘Wilderness’, a spaced out grinding slaughter of a tune, with massive support from DJ Youngsta, Seven, Walsh and Anti social.

Another highlight that rounds off the album is a brand new track by K-aze a.k.a Lemon D, one of the most innovative and legendary jungle dnb producer brings something totally new to the table with the garage influenced/early hardcore dancefloor smasher, ‘Hot Groove’.