Tom Mansi and the Icebreakers are back! Their new single Need Want is out in November via Metric Acorn. 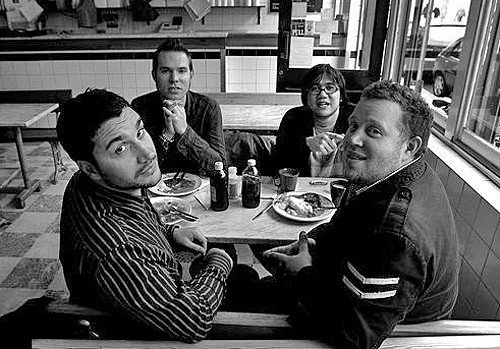 “…the band I always wanted to be in…”. Jamie T
In this new single Tom Mansi and the Icebreakers unmistakeable brand of alternative British Rockabilly Punk meets the storytelling of a mid 60ies Bob Dylan to form a raw and exciting 4min rock ballad.

Unleashed and out of control doing what they want, how they want on their own terms and on their own record label Metric Acorn Records.

The new album, Perils A Plenty, has been recorded in their own studio with the help of legendary producer and mix engineer Tony Platt (AC DC, Iron Maiden, Bob Marleyâ€¦) and comes as a follow up to their successful debut of 2008â€˜s album â€œLove on the Railsâ€ which featured the breakthrough single “Hollyâ€, BBC Radio 2â€˜s Record of the week.

Tom Mansi and the Icebreakers are Paul White on guitar, Alain Man on keys, James Johnston on drums and Tom Mansi slinging the upright bass and handling lead vocals.

Having met many years ago, while playing for a North London youth big band this quartet has played together in various Jazz, Boogie Woogie and Rock nâ€˜ roll groups ever since.

While all four members have extensive background working as sessions musicians, Mansi in particular has developed a wealth of music and life experience playing gigs in theatre pits, jazz clubs, and studio sessions for artists as diverse as Sugababes and Goldcut.

Since, Mansi and the band have been touring the UK and Germany supporting the likes of Son of Dave, The Sadies, and The Heavy.

Having made festival appearances at the Big Chill, Secret Garden Party, Larmer Tree and Glastonbury amongst others, the band has played more than 100 UK and European shows in 2009/2010 so far.

After a very successful UK seaside busking tour promoting their British Seaside single â€˜Donkey, Punch and Judyâ€™ they have plenty more UK gigs as well as a German tour in their calendar.