2010 is set to be a big year for The Title Sequence, formerly known as The Sound Of Bailey the North London duo are set to release their all new single â€˜Loversâ€™ on 24/05/09 followed by a remix for James Yuill and debut album at the end of summer.

With their beautifully crafted songs and innate grasp of melody itâ€™s easy to see why they have already picked up plaudits from the likes of Steve Lamaq, Huw Stephens, Chris Coco and Tom Robinson to name a few. 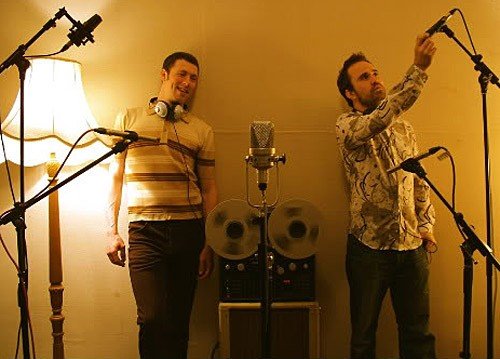 Lovers is an unforgettable track that builds from a rolling groove into interweaving, layered harmonies. Their crisp production style really brings out the vocal and with a subject matter we can all relate to this song is poised to set the soundtrack to the summer.

Songwriter David Bailey and producer Nick Crofts have been friends since childhood and formed The Title Sequence in 2007. The close chemistry between them becomes obvious when they perform together.

The band are also joined on stage by a third member in the form of a vintage reel to reel tape machine providing sporadic instrumentation and sitting perfectly in the mix between the two.

Bailey’s warm natural charisma endears him to any crowd. The real ace up his sleeve is his ability to marry wit with fine, wistful sentiment; where unrequited love exists as tangibly as a copy of the TV Times found on the seat of a train, sharing headphones on walkmans and “seeing a girl, and within the space of three minutes inventing an entire imaginary relationship with her, right up to the point of the inevitable break-upâ€.

Their obvious love of electronic music weaves its way effortlessly into their songs and live set, which also includes a cover of an Aphex Twin Track â€œAblerto Basalmâ€. All these influences help shape The Title Sequenceâ€™s unique sound. This is pop, but not as we know itâ€¦

Plans to launch the band in 2009 had to be put on hold due to Crofts having to travel to China to work on an original music score for one of Chinaâ€™s biggest show productions.

During four months of working with an array Chinese musicians and performers he also found time to produce a few stunning remixes of the bands songs.

The duo are now back together drinking tea in their London flat and continuing to finish their debut album in their London studio.
SINGLE: LOVERS/EVENINGS SPENT WITH YOU
RELEASE DATE: 24/05/10
LABEL: FERALTONE
On your own – The Title Sequence Remix Master
www.myspace.com/thetitlesequence