Today sees the return of Belfast folk rockers The Lowly Knights with the release of their eagerly anticipated â€˜The Even Keel EPâ€™. 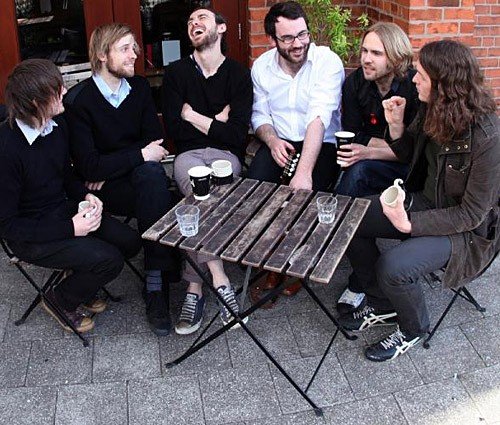 This EP follows the success of their previous efforts, the critically acclaimed â€˜The Rifles EPâ€™ and â€˜The Hollow EPâ€™ and promises to be an even bigger and bolder affair than its predecessors.

Championing a sound which combines grand-voiced exuberance with a ramshackle folk edge, The Lowly Knights have more than earned their place in Belfastâ€™s strong tradition of literate, folk pop. Gorgeous harmonies, soaring orchestral arrangements, and the kind of melodies that keep you humming for weeks have hooked the hearts of gig-goers and critics alike.

An energetic live performance with hearty group vocals and musicians switching between an ever-expanding array of instruments makes a night with the Knights a truly memorable affair.

Their adventure thus far has brought The Lowly Knights to share the stage with The Divine Comedy, Mumford & Sons, Duke Special, Iain Archer, Frightened Rabbit, and on a number of dates as support for Snow Patrol on their recent UK arena tour where they proved themselves as comfortable and spontaneous on the big stage as they are busking in the sun.

Packed out venues, songs on the roof of a shopping mall, and sellout shows in Belfastâ€™s 500+ capacity venues Stiff Kitten and Spring & Airbrake.

Live sessions on BBC Radio Ulster and U105, airplay on BBC Radio One among several other stations, and glowing reviews in local and Irish national press have thrust The Lowly Knights into the public eye.