If you happen to be lost in the woods of Sweden and stumble across a remote cabin you may come across a girl and boy duo making sweet ethereal music, the locals know them as The Deer Tracks, they know each other as David Lehnberg and Elin Lindfors. 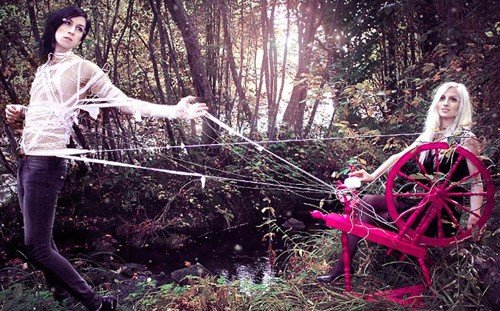 Their epic trilogy began with The Archer Trilogy Part 1.Now Lehnberg and Lindfors have come out of their isolated, barely functional cabin to share with us the second instalment of the trilogy; a full-length album, The Archer TrilogyPart 2.

“If you’re locked up in a studio where everything is perfect and there’s no wind or rain blowing in to destroy the recording—if you don’t push the boundaries —it’s gonna sound like you’re not trying to do something that’s real. But if you lock yourself up in a cabin in the woods, things start to happen. You’ll start to find your way back to your inner core, back to life,” says David of The Deer Tracks.