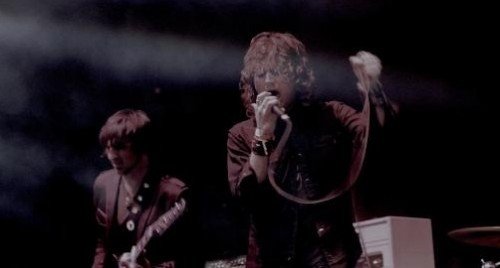 RIVAL SONS are the latest group to be featured on music video website VEVO, which is already home to big-name artists ranging from GUNS N’ ROSES and BON JOVI to LADY GAGA.

RIVAL SONS drummer MICHAEL MILEY comments on the video:
“I’m so fired up for the release of the ‘Pressure and Time’ video, which is the first single off our new album. We filmed this baby in about two days at about 23 different locations. Though it was fun as hell, loading and unloading 23 times was worse than moving into my apartment!! We had a blast and ate authentic vegan Mexican food and drank homemade vodka about a mile from the Mexican border. It was epic!!”

RIVAL SONS bassist ROBIN EVERHART adds:
“Really excited to present this video for ‘Pressure and Time’! Videos in general are a lot of hard work, this one doubley-so. We were fighting the clock, the elements, the authorities, and our van got stuck in the sand at one of the locations. Greg, Stephan, Ian and the whole RMS crew did an amazing job with the little time that they had. Hope you all enjoy ‘Pressure and Time’, more than we did making it!”