‘Notes on: Death’ by Petra Jean Phillipson is a challenging, provocative & brave 2nd LP from this extraordinary British talent. 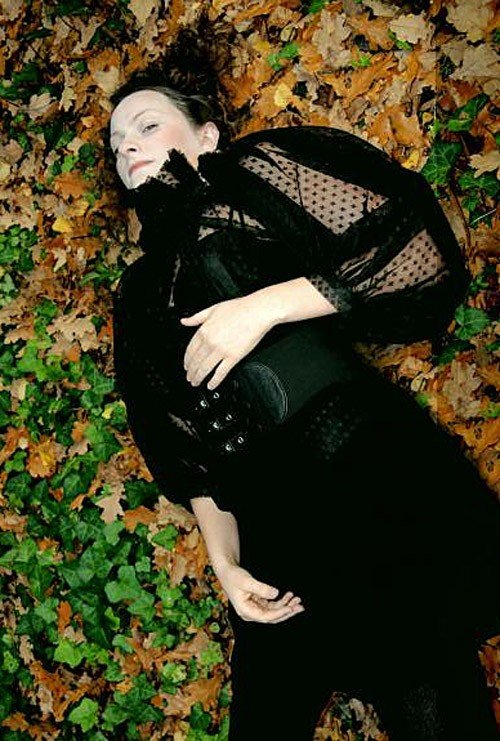 After her collaboration with David Holmes fronting The Free Association, a string of session singing for the likes of Marie Anne Faithful & Martian Topley Bird, film work such as Analyse That, her critically acclaimed debut Notes on: Love Petra retreated from the lime light to the French countryside to write. She has now returned with great force.

On asking Petra Jean what she has been doing these past 5 years she replies, I’ve been learning about soil & mysticism. I’ve been learning about who I really am & what I really want. I’ve been learning how to be a woman.
02 Victorian worship song-DISC1-BLANC by Petra Jean Phillipson
Although Petra Jean says she was on retreat she has still found time to produce A Tribute LP to Karen Dalton, fronted with Long time collaborator Simon Tong (x-Verve & Gorillas), produced & recorded M. N. Hopwood’s debut album And to this Last composed her first score for art house Director Philippe Vartan Khazarian’s film Deviation & completed production on her second solo album entitled NOTES ON: DEATH.

Petra Jean has shed her skin as singer & now seriously grips the mantle of producer & creative director of the 2nd in the offering of her conceptual Notes trilogy.

Here in her double Lp she has chosen to divide her Recordings into BLACK & WHITE sides.

NOIR is stunningly counter balanced by BLANC creating spiralling soundscapes of Dante’s inferno in Underworld Tubeophany versus the ascending scales of Imaginary Gentle place in Blanc.

Petra has an ability to transport us from the spine chilling Kurt Weill-esque humour in NOIR to the beguiling angelic choirs of BLANC, both executed effortlessly. A brave statement indeed. It is contradicting mixture of strength & fragility in the same breath.

So why the title notes on DEATH?
When I was 5 years old I found my Uncle Tom dead in his chair, this was the start of my questioning. Why do we have to die? Where do we go when we’re dead? What is a soul? Why did God let this happen? I was always a very curious child & as an adult I’m interested in understanding.

I’ve always been obsessed with death in one way or another I had had many unusual experiences in my life I wanted to enquire in greater depth. To speak of Death is to show that I am most alive.
03 And Lilith said unto Adam-DISC2-BLANC by Petra Jean Phillipson
Tell me about the recording process?
With in the process of producing Notes on: Death Petra explains how she was, interested in capturing magic, most of the tracks are 1 take demos. I wanted to capture the electricity of the moment an idea is conceived, before your acting. So there is a strong element of improvisation to the recordings.

Also I recorded the sessions on the FULL MOON to harness that electricity that keeps you from sleeping when it’s out.

How about the lyrics in City of lost Angels
That’s the other point I’m making in the record. Dead people have always talked to me. It’s an account of an experience I had when I lived in West Hollywood in Jed Stollers apartment. Here in the west if you here voices your drugged & locked away. In Cuba you have a drink & celebrate your family still around in spirit.
02 City of lost Angels-DISC1-NOIR by Petra Jean Phillipson
What about you live shows?
Meeting Marie Anne Faithful & seeing her play the devil in Tom Waits’The Black Rider’s changed my life! says Petra Jean.

It opened a door in her mind to ideas on performing live. Petra is now getting the opportunity to explore her performance boundaries as associate artist in The Print Rooms in Notting Hill Gate.

Invited by Lucy Bailey, theatre Director (Macbeth-Globe), to develop her work in the new fringe space. Petra premiered a pre launch theatrical show of 7 of the songs with great success. This special performance challenges the idea of what a gig can be incorporating Butoh inspired dancers & performing in the round.

I was interested in developing an experience rather than a conventional voyeuristic gig.