Amnesty International is joining with Yoko Ono and Ozzy Osbourne in shining a light on the 70th anniversary of the birth of John Lennon with a special new recording of the iconic Lennon song “How?” 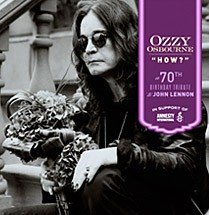 The recording is available now worldwide as a digital download exclusively on iTunes, just few days before what would have been Lennon’s 70th birthday on October 9.

“Lennon was a driving force for humanity,” said Ozzy Osbourne who cites Lennon and the Beatles as his inspiration for becoming a musician.

Three years ago Ono donated to Amnesty International all of Lennon’s publishing royalties for “Instant Karma” – Amnesty’s album of Lennon compositions performed by many of the world’s leading artists including U2, R.E.M., Green Day, Black Eyed Peas, Aerosmith and Christina Aguilera.

“This year the whole world is celebrating the 70th anniversary of John’s birth,” Yoko Ono said. “His spirit and influence is stronger than ever. ”

Amnesty International USA’s Executive Director Larry Cox said, “Yoko and John Lennon were devoted to seeking a better world and used the power of their artistry to work toward that goal.

Ozzy Osbourne’s gift, with Sharon Osbourne’s strong and generous support, makes the same powerful statement today – that individuals can make a difference when they join with others who share a commitment to justice and freedom.”

The recording was produced by Grammy Award-winning producer Mark Hudson.