Discover this new band from Seattle, Washington called Monarch. As their music has been dubbed as melodic-driven indie pop Monarch has been compared to bands like Elbow, Sigur Ros, Keane, and Denali. 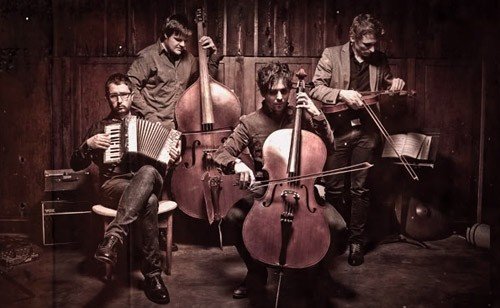 WHO ARE THE BAND MEMBERS AND WHAT DO EACH OF YOU DO IN THE BAND?
Brennan Strawn- Lead Vocals/Guitar
Jimmy Nichols- Keyboards
Jesse Proctor- Background Vocals/Drums
Warren Kinser-Bass

WHAT KIND OF MUSIC DO YOU MAKE / PLAY?
Melodic Driven Indie Pop

WHERE ARE YOU FROM?
While each member is from various U.S. states (Chicago, Pittsburgh, Washington State, Oregon), the band currently lives in Seattle, Washington

HOW DID YOU GUYS GET TOGETHER AND WHEN?
Brennan started the band back in 2002 when he lived in Pittsburgh, and after the band parted ways he moved up to the Seattle area in 2008.

That’s when Jesse, Jimmy, and Warren joined through mutual friends of Brennan and Jimmy.

WHO ARE YOUR INFLUENCES IN THE MUSIC INDUSTRY?
Elbow, Doves, Muse, Keane

WHAT HAS BEEN THE HARDEST PART OF BEING IN THE BAND FOR YOU?
I think for all of us it’s learning how each person operates within the band.

We’re quite a bit different and it can be difficult to have a proper expectation and/or mind set when writing/working/hanging etc.

TELL US A BIT ABOUT YOUR EARLY DAYS AND HOW THEY DIFFER FROM NOW?
In most ways we are still in our early days. The current version of Monarch is nearly two years in the making.

WHAT WAS THE LAST GIG YOU PLAYED, WHAT DID YOU THINK OF IT?
The Crocodile Cafe in Seattle, Washington. We all felt really good about it, and the new direction of Monarch’s music.

DO ANY OF THE BAND HAVE ANY IRISH OR NORTHERN IRISH CONNECTIONS? IF SO TELL US ABOUT THEM?
Not yet unfortunately, but does it count if Jesse drinks likes he’s Irish?

WHAT’S THE MOST SUCCESSFUL THING YOU GUYS HAVE DONE TO DATE?
So far the most successful thing we’ve done has been getting our music on a few TV shows for MTV

WHO HAS HELPED YOU THE MOST GET TO WHERE YOU ARE TODAY?
Brennan has some great friends in the industry that work with the band OneRepublic.

While we are still the ones making our music happen, they’ve been able to give invaluable input. Also, thanks to our L.A. based label Northern Records!

WHAT’S COMING NEXT FOR THE BAND?
Exposure. We have always heard great things about our music, and we are working hard to get as many people to hear it as possible.

IS IT HARD BEING A NEW BAND IN TODAY’S INDUSTRY?
It can seem daunting as there a so many good bands out there, however we believe there’s always room for good art.

HOW IMPORTANT IS THE INTERNET AND SOCIAL NETWORK SITES TO THE SUCCESS OF YOUR BAND?
It is very important for us, considering we have pockets of fans in many different places.

As the band originated outside of the Seattle area (where the current band lives) we have fans from all over the U.S. as well as a few other countries to include China, Austria, Russia, and the U.K. Facebook and Myspace allow us to keep in touch with them as we release new music.

Someday we will get the privilege to travel to where they are and meet them in person.

QUICK-FIRE QUESTIONS:
WHO’S THE MESSIEST IN THE BAND?
The running joke is that Jesse doesn’t shower, although we have yet to determine if that’s true…


WHO IS HARDEST TO LIVE WITH ON TOUR?
I can’t say “hardest,” but Jimmy is the most particular when it comes to food choices that may or may not be available on the road

WHO IS THE JOKER AND WHY?
Brennan knows how to turn any serious moment into a joke of some sort…

WHO MOANS THE MOST?
Jesse, but at least he does it to our face, and not only behind our back

WHO IS THE MOST ROCK ‘N’ ROLL & WHY?
I don’t really think any of us are rock n’ roll

WHO IS THE LOUDEST?
Brennan is the most expressive, but that doesn’t really equate to loud

WHAT’S THE MOST EMBARRASSING THING SOMEONE IN THE BAND HAS DONE?
Brennan played on stage without his shirt on once….that was back in the day…

WHO WOULD YOU MOST LIKE TO COLLABORATE WITH IN THE INDUSTRY?
We would all love to meet up with Guy Garvey of Elbow, and I think Brennan has a thing for Bette Midler

WHO WOULD YOU MOST LIKE TO COLLABORATE WITH IN IRELAND OR NORTHERN IRELAND AND WHY?
The Frames as we’re big fans of Glen Hansard/Swell Season
www.myspace.com/monarch.band
By Tina Calder
©FAMEmagazine.co.uk