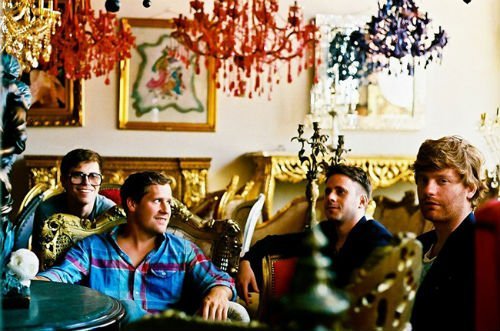 LA-based alternative-electro-pop band, Mansions On The Moon – Ted Wendler, Ben Hazlegrove, Lane Shaw, Jeff Maccora – share ‘Somewhere Else Tonight’. A slice of charming and luxuriant summer electro-pop tune, just the perfect follow up to the recently revealed ‘Don’t Tell’. Both tracks are taken from their upcoming debut self-titled album, released on October 22nd.
The band explain: “We wrote Somewhere Else Tonight during our first few months in Los Angeles. The chorus was inspired by our move from East to West Coast . After we wrote the verses, the lyrics became a metaphor, not only for getting out of one’s comfort zone but also for returning to a childlike, imaginative perspective towards mundane everyday life.”

MOTM has partnered with Pledgemusic to offer exclusive merchandise packages through an online pre-sale campaign which will help fund the album printing, production, and tour. With live shows, new music and more coming this year, 2014 is shaping up to be an exciting year for MOTM.