Man Without Country: The name carries an instant intrigue. The band themselves, a South Wales based duo, say it derives from “a sense of not belonging.” This sense lies at the root of their atmospheric, sometimes uneasy sonic palette. Glacial guitar ripples spliced with an eerie synth pulse, yet with the ability to morph into an anthem when you least expect it. 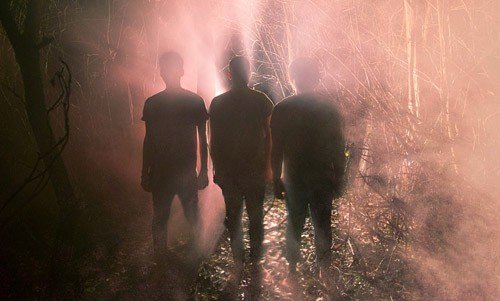 “All the editing was done at home. Down to the last second, when it was sent to Ken Thomas, it was all on Ableton.” Ken Thomas is the man responsible for mixing the album, and represents quite a coup for the band. In recent years he’s been behind the desk for albums like Sigur Ros’ ‘Takk’ and ‘Saturdays = Youth’ by M83, both important to the development of the MWC aesthetic, but his 1980s work with industrial pioneers like Psychic TV, 23 Skidoo and Clock DVA is relevant to the outcome too.

Foe, carrying a sense of unease and paranoia, is 45 minutes of music both complex and complete.

The emotional intensity expressed in their songs is matched by the immersive throb of an MWC live show. It’s loud, layered and low on lighting, shrouding the two in a fog of mystery – a theme that runs across all their visuals. It brings out their hazy shoegaze and beat – driven electronica in equal measure, their delay-drenched sound magnified magnificently.

In all respects MWC are aiming for something higher than the norm and are succeeding.