We love Lissie’s duet with Ellie Goulding at this month’s Great Escape festival. The pair performed ‘Everywhere I Go’, one of the stand-out tracks from Lissie’s forthcoming debut album ‘Catching A Tiger’ on Columbia Records. 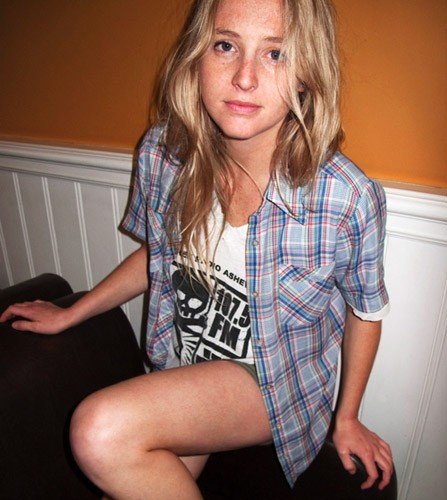 The release of ‘Catching A Tiger’ follows swiftly on from the massive acclaim received for her recent In Sleep EP, released last month, which also garnered exceptional response as iTunes single of the week and from last years US released Why You Runnin EP on Fat Possum, which has already sold over 10,000 copies since it appeared stateside last Autumn.

It has been a whirlwind few months for this mesmerizing new artist from Rock Island, Illinois that has seen her triumphantly win over the SXSW festival with an unfathomable 10 shows in 3 days, championed by as broad a media spectrum as you could possibly imagine.

In a year dominated thus far by stylistic female artists Lissie stands out notably from the crowd; there is nothing whipped or spun, styled or shaped about her, her performances are both refreshing and honest and individually unique.

Online she has picked up over a million plays on YouTube as fans have discovered her charms, alongside some spectacular cover versions, that began with her take on Metallica’s Nothing Else Matters for the Dermot session and has since taken in Lady Gaga along the way to rave response, showing the versatility and depth of that voice that and has also seen her pick up praise and support from a broad range of artists, from Courtney Love to Ellie Goulding.

For further evidence of this fantastic talent, Lissie can be seen performing Oh Mississippi, taken from Catching A Tiger on last week’s Later with Jools Holland.

Having now decamped to the UK from her home base in Ojai, California for the foreseeable future, Lissie continues to tread the boards across the nation’s live venues.

Having recently completed a series of dates as special guest to Joshua Radin, she continues her relentless program of touring with shows alongside Local Natives, City & Colour and Kassidy, and has already confirmed festival appearances at Glastonbury, Bestival, Latitude, Dot To Dot, Evolution, Summer Sundae, Secret Garden Party with more dates and festivals to be announced over the coming weeks.

For starters there is a voice that crackles with the influence of the blues as much as it does with say folk music, and a range and delivery that could put most rock singers to shame.

Then more importantly there are the songs; where wonderfully brooding & emotionally charged stories mix with a magical warmth that feels as at home blasting out of a radio today as it does driving across the desert with the wind in your hair.
www.myspace.com/lissiemusic
Lissie releases her debut album Catching A Tiger’ on June 21st on Columbia Records.