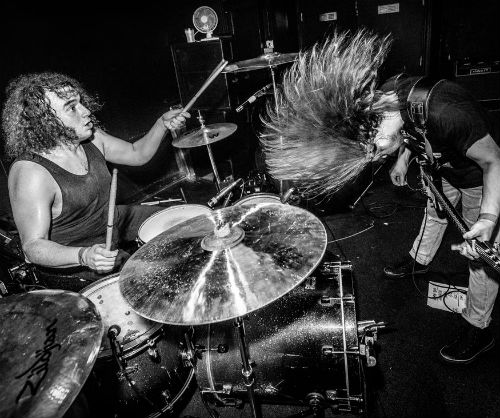 Powerful drum and guitar duo God Damn – Thom Edward (guitars/vocals) and Ash Weaver (drums) – unleash some blazing “rock music for degenerates” in the form of their new darkly propulsive tune ‘Hours’, released via One Little Indian Records on October 27th. The track is about the Egyptian Sun god Horus (who has the body of a man, a birds head, with one eye the sun and the other the moon!)…

On the their imminent UK tour, vocalist and guitarist Thom Edward says: “We can’t wait to take this new material out on the road! We are known for being one of the rawest on the circuit using heavy dynamics with a quiet/loud/jet-engine decibel range…a sing-along nosebleed kinda vibration. We’ve made a very textured, visceral and angry record with those pop barbed hooks. We’re fully intent on making layered studio albums with depth and then gloves off, knuckle dusters on for the shows!”