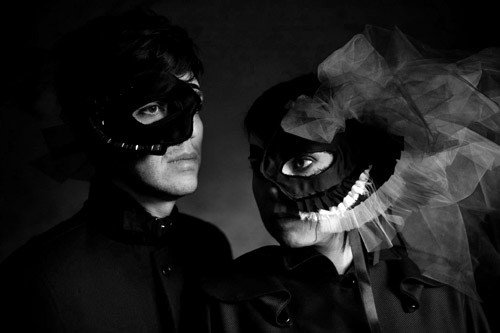 It is a dreamy and opulent sound anchored by driving beats and a menacing edge. Written, recorded and produced by collaborators Hector Villaraus (producer, composer) and Sarah Villaraus (songwriter, lyricist), ‘Crows’ Wedding’ features a strong collection of songs that immerse you in a world of powerful, futuristic pop.

‘Crows’ Wedding’ is the first of three EP releases, which will be uncovered in the next few months to follow. The trilogy of EPs will gradually showcase their work and form an album’s worth of material.

Their first single ‘Wolf Girl’, which was mixed by Grammy Award winning Dom Morley (Amy Winehouse, Back to Black) and mastered at Metropolis Studios in London, was released in March 2011 and included an industrial remix by legendary Gary Numan.
facebook.com/evokateur