Psychedelic Disco-Tech: No, its not just another lame ass musical genre coined by a journo for trainspotting anoraks (like ourselves?).

As DarkStarr is about melding musical styles and fusing different sounds, Ash and I could not put a label on it. 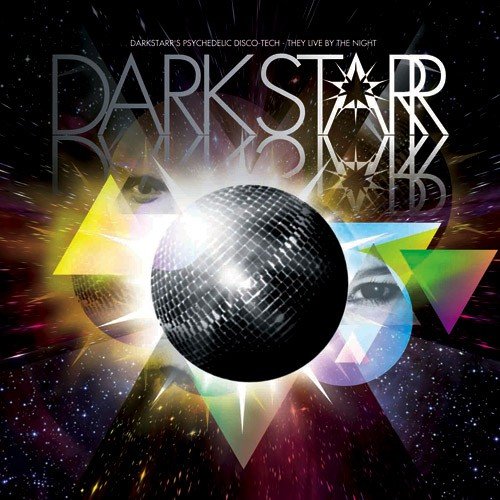 How do we describe the amalgamation of trippy, far-out tunes we play at our nights? What term can depict the variety of moods and emotions we portray without locking us into a certain category?

We needed an illustration that was all encompassing and â€œpsychedelic disco-techâ€ just seemed to cover it.

So forget about the title of this compilation. Donâ€™t trouble yourself where any of this â€œfitsâ€ into the dance music scene of today or how this music all relates to each other. It will become evident in its own organic way. Just press â€œPlayâ€ and let yourself enter another musical stratosphere where there are no genres â€“ just music. COSMO

DarkStarr is the new unit formed of music superheroes Ashley Beedle and Colleen â€˜Cosmoâ€™ Murphy.
‘Cosmic Disco’ ‘Acid House’ ‘Psychedelic’ ‘Balearic’ – these are the overused and misunderstood terms used to hype todayâ€™s dance music scene. Every other week we have a new party or DJ cropping up claiming to be experts in this field.

Ashley Beedle and Cosmo give this music the respect it deserves whilst putting the soul back into the party. With their first hand experience Ashley and Cosmo stand in a class of their own. Ashley has been Londonâ€™s premier Soul Boy for decades.

His work under the monikers of X Press 2 (with Rocky and Diesel), Black Science Orchestra, Heavy Disco and Ballistic Brothers proves Ashley is one the few DJ/producers that can be both diverse and credible at the same time.

Cosmo draws on her heritage from the other side of the pond. Her tutelage by David Mancuso within The Loft is unique within todayâ€™s generation of DJs and her New York City radio shows of house, disco and psychedelic rock tuned in and turned on a generation of new listeners from the late 80â€™s onwards.

DarkStarr sees Ashley and Cosmo reviving celebrated New York / London traditions. Drawing on Cosmoâ€™s experiences at the Loft and Body & Soul, ‘DarkStarr’ has the DJs playing together as a one-on-one stream of consciousness rather than having specific ego-driven DJ sets that break up and fragment the vibe. They play without boundaries and let the music do the talking, playing records in full and letting them tell a story.

DarkStarr is refreshing and fun, oozing with credibility and heritage, putting the funk and soul back into the party.