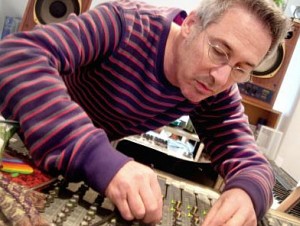 Primarily known as the co-song writer and one of the founding members of the legendary Ian Dury & Blockheads, Chaz Jankel’s distinctive musical style can be heard sprinkled all over hits such as Sex and Drugs and Rock and Roll, Hit Me With Your Rhythm Stick and Clever Trevor and his massive solo hit Ai No Corrida.

Chaz still tours with The Blockheads, keeping the memory of Ian alive for fans new and old, but the Bafta nominated musician has also been busy recording and producing his first solo album of new material for over 10 years!

The resulting album The Submarine Has Surfaced is a delightful revelation of Latin groove, classic soul and British funk and features some fantastic vocal contributions from several hotly tipped new talents from the UK underground dance scene including MC Tali of Rogue Nouveau.

The record marks a return to Chaz’s club orientated roots and is bursting at the seams with memorable hook filled tunes!

A special mention is reserved for the recent 12 inch club smash ˜I Come Alive which acts as the perfect introduction to this album with its bass driven Latino house vibes and effortless cool.

A tour in support of The Submarine has Surfaced is planned and promises to be a journey through Chaz’s extensive performance history that showcases his new material alongside his back-catalogue of hits and will include the unforgettable Ai No Corrida that was covered by none other than Quincy Jones becoming a worldwide hit on release.

Chaz Jankel proves with the release of this new record that he is as vital to the UK music scene as ever the submarine has indeed surfaced!

It’s a Dazzling return for this influential songwriter. Let’s hope we don’t have to wait for another 10 years for his next album!
9/10

CHAZ JANKEL
The Submarine Has Surfaced out June 28th
www.myspace.com/chazjankel