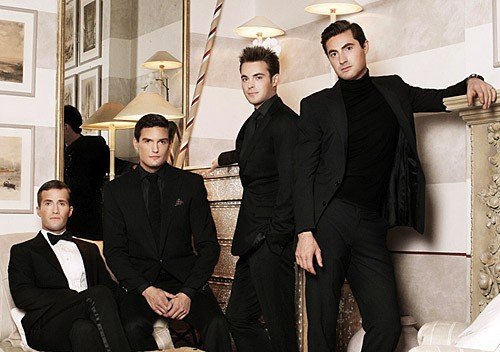 Written, recorded and released in 1974 by Charles Aznavour and Herbert Krezmer the song was a number 1 single in the UK and, more recently, was recorded by Elvis Costello in 1999 for the soundtrack of the film Notting Hill.

Blake (tenors Ollie Baines and Humphrey Berney and baritones Stephen Bowman and Jules Knight) are joined by Britainâ€™s Got Talentâ€™s Julian Smith on saxophone on this recording which is produced by Adrian Munsey and Nick Patrick.

With over half a million albums sold worldwide, Blake continue to build their reputation as one of the most eclectic and exciting classical-pop groups in the world.

Blake are currently on a UK tour entitled â€˜An Evening With Blakeâ€™. The tour runs until the end of November and is their largest UK tour to date.

Blake have opted to travel around the country riding their motorbikes instead of a tour bus and are ambassadors for the Get On campaign www.geton.co.uk which encourages people to swap four wheels for two.

The quartet recently hit out at the use of Autotune claiming it to be the musical equivalent of performance enhancing drugs. Blake have launched SingUp, a national search for choirs to perform with them on their UK tour.

A different local choir will join them at each of the 26 concerts.

In November 2010, Truro Cathedral and Gloucester Cathedral will host the first two concerts in a series of concerts entitled â€˜The Cathedral Concertsâ€™.

This series which will run throughout spring 2011 and will include concerts in St Albans, Worcester, Bristol and Salisbury.

These cathedral concerts will be an opportunity to enjoy an evening of classical and popular music from Blake in the spectacular atmosphere of some of the most beautiful venues in the country.